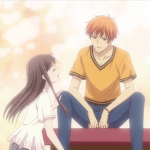 I am from American and English is my nation language. I own Pandora Hearts Volumes 1-24, Crimson-Shell, The Case Study of Vanitas Volumes 1-5. I also own two of Jun Mochizuki's friend's manga Inu x Boku SS and Black Butler manga/anime series.

Louis reads alone in his room as a thunderstorm breaks out over Altus. Thinking of how peaceful the sound of rain is, Louis anticipates Dominique’s arrival. Shortly thereafter, there's a knock on the door, with Dominique asking Louis if she can sleep in his room for the night. Louis admits that there's no avoiding it and permits Dominique's request, prompting an ecstatic Dominique to parade into Louis' room with Noé not far behind her; much to Louis' chagrin. As the two climb into his bed, Louis comments on how difficult it can be to sleep with Noé, as he moves too much in his sleep - though Noé denies this to be true. Reinforcing his statement, Louis call Noé a liar and proclaims that Noé also gets "muzzy headed" right away - once again being met with denial from Noé.

Noé and Dominique promptly latch on to Louis, with Louis asking if Noé is afraid of lightning as well - only to realize that Noé had immediately fallen asleep. Dominique explains that Noé had said that sleeping alone on rainy days made him feel lonely, so he decided to come with her. Dominique then reminisces about how the three of them used to sleep like this all the time, but they don't anymore because they'd gotten too old for it. Mulling over the situation, Dominique tells Louis that she wishes that she could stay with their grandfather all the time too. Louis is shocked by this, and so Dominique elaborates that whenever she goes home, all she does is take lessons and study, and their parents do nothing but compare her to Veronica and get mad at her as a result. Furthermore, Dominique mentions that Count de Sade is scary and that she has a lot more fun playing in the forests of Averoigne with everyone; claiming that she envies Louis.

Retrieved from "https://pandorahearts.fandom.com/wiki/User:Kitsunes97?oldid=64036"
Community content is available under CC-BY-SA unless otherwise noted.