Chain of the Baskerville Clan

Tove was the Chain of the more sophisticated and just member of the Baskerville, Fang. Fang had Contracted with Tove sometime before his drop into the Abyss during the Tragedy of Sablier, though when exactly is left unclear, and Tove proceeded to stand by Fang's side when he was released from the Abyss close to 100 years after the Tragedy. Unfortunately, though Tove and Fang faced off against Xerxes Break and Gilbert at Isla Yura's Feast, the clash resulted in the death of Tove's Contractor, and so Tove's Contract was nullified, leaving his fate more or less unknown.

Sometime after Oswald succeeded Levi as Glen Baskerville, Fang was accepted by the Droplets of Light and guided to the Baskerville estate, where he joined the Baskerville Clan in their ongoing mission to maintain the harmony of the Abyss. As all Baskervilles were meant to have a Chain to not only act alongside them on the battlefield, but to act as a life long friend as well, Fang was obligated to forming a Contract at an unspecified moment after his induction. In the end, Fang chose Tove, and so the two exchanged blood and solidified their life long bond together.

When Oswald's destined successor, Gilbert failed to inherit Raven during his first Succession Ceremony due to the opening of another of the Doors to the Abyss, Oswald immediately analyzed the situation and gathered his subordinates in order to order them to kill anyone on the estate - a vague order that received no elaboration. Due to their obligatory obedience to Oswald, Fang and the other Baskervilles proceeded to slaughter every human they came across, however whether Fang utilized Tove's power in order to do so is unknown.

After Fang had gotten separated from his colleagues as they searched Isla Yura's estate for the third Sealing Stone, Fang found Lily attacking a Pandora member named Reim Lunettes as part of a vicious attempt at play. Fang pronounces Reim to be dead, only to be overheard by Xerxes Break, who was one of Reim's oldest and closest friends. As he attempts to deal with the shock of the situation, Break summons Mad Hatter and attacks the Baskervilles, prompting Fang and Lily to retreat outside of the mansion in order to not be so confined when they battle Break.

As the battle rages on, Break realizes that the Baskervilles' bodies are more Chain-like than human because of all the Abyssal power they'd absorbed, which thereby allows them to heal from their wounds. When Break seems to be wearing down, Fang summons Tove and has him tunnel underground in order to attack Break from below, launching himself forward in order to slash through Break's side with his claws as he emerges from below. Break, having taken massive amounts of damage from the overuse of his power - attempts to sacrifice himself by using Mad Hatter to kill Lily and satisfy his lust for revenge. Unexpectedly though, Gilbert rushes in and manages to stop Break so that they can work together to take down the Baskervilles, summoning Raven in the process. Tove jumps onto Lily's head and clings to her as Fang picks her up and retreats in order to avoid Raven's blue fire. Despite Fang's suggestions of retreat, Lily is determined to kill Gilbert so that Oswald can reclaim Raven as his Chain when they locate his soul - prompting a reluctant Fang to circle back so that they can confront Break and Gilbert.

Once more the Baskervilles stand off against Break and Gilbert, though while Fang continues to fend Gilbert off, Lily draws the gun she'd stolen from Reim and takes aim at Break - who continues to grow weaker because of the strain of Mad Hatter. Reim, revealed to have survived, calls to Lily from the forest, distracting Lily long enough to give Break an opening. Seeing how grave the situation had gotten, Fang jumps in front of Lily, pushing her out of the way and taking Break's sword, as well as Mad Hatter's deadly power, through his torso. Fang's body crumbles because of Mad Hatter's power, though he's happy to finally be given the freedom he's longed for, dying just as Lottie arrives to retrieve Lily. While Fang's body disintegrates into sand, Tove weeps over his Contractor's death as he sits over Fang's now empty cloak. In the end, Tove's existence fades away, leaving his fate relatively unknown.

Tove appears as a small badger, with black markings over its eyes, its arms and black stripes that lead down to its behind that thicken and make its lower half black as well. Tove has very sharp claws and two short tails, each with a white stripe. Tove is mostly brown in coloring and has blue eyes.

Tove and his contractor 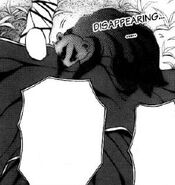 Tove whimpers over Fang's death
Add a photo to this gallery

Retrieved from "https://pandorahearts.fandom.com/wiki/Tove?oldid=48669"
Community content is available under CC-BY-SA unless otherwise noted.