The Nursery is the title of the one-hundred-and-second chapter of Jun Mochizuki's Pandora Hearts.

As he prepares to allow his Incuse to make its full revolution, Oz remembers what Gilbert told him about the Incuse that an Illegal Contractor receives upon the forging of their Contract. Gilbert had stated that the Incuse acts as a time limit to signify an Illegal Contractor's remaining time in the 1st Dimension. Once the Incuse makes its full revolution, the Contractor would be dragged down into the lowest level of the Abyss as punishment for the sin they'd committed by forming a Contract outside of the Abyss' chosen few.

Intrigued, Levi realizes that Oz had been using his powers as B-Rabbit so willingly and without reserve in order to purposely progress the hand on his Incuse as quickly as possible. While Levi gives the plan merit, as using the power of B-Rabbit will undoubtedly open The Path to the heart of the Abyss, but he wonders if Oz is fully aware of what will happen to his existence in the process.

Suddenly, Lottie's shadow starts to flow outward in wisps of darkness. During Lottie's confusion, Sharon finally manages to break through and makes contact with Lottie through Equus for the first time since they'd entered the time vortex in Sablier. Lily pushes her way through and asks if Lottie and Dug can hear her, crying frantically as she does so. Sharon pushes Lily back - prompting Reim to order Lily to stay out of the way by remaining at his side - and admits that she's happy to have been able to make contact with them once again. Oz is overjoyed to learn about Equus' presence in Lottie's shadow and rushes to Lottie's side to speak with Sharon - who is glad to hear that Oz is okay. Oz returns the sentiment, prompting Sharon to reveal to him that Reim's been helping to keep her safe ever since The Courtroom Dimension collapsed - which confuses Oz because he wasn't aware that Reim had ventured into the dark city. Continuing, Sharon asks how Alice and Gilbert are doing, assuming that they're still with Oz. Sharon reveals that Equus' powers have been disturbed, so she can't see what's happening on their end and she can't continue to maintain their connection over such a long distance for much longer. Hearing this, Vincent looks to Ada and attempts to decipher his next move, while Oz reveals to Sharon that Alice and Gilbert were separated from the group, but they intend on reuniting very soon.

Stepping forward, Vincent asks Lottie for a favor. Meanwhile, Sharon requests that Oz try to come back with everyone, as she's planning a tea party for when they return - which Oz is happy to hear, thanking her for her troubles. Standing, Lottie states that she wants to send someone back through Equus, asking if such a thing could be done, to which Sharon says that they can give it a shot. Without hesitation, Vincent grabs Ada and tries to haul her toward Lottie as Equus projects a portal from her shadow. Though Ada tries to protest that she'd be fine and that he doesn't need to do this, Vincent embraces her and tells Ada that he doesn't like her and that she's always been an eyesore that he wanted to disappear. Vincent's cold statement is enough to stun Ada long enough to allow him to push her back into Equus' portal - bidding Ada a solemn farewell as the portal closes. Back in the 1st Dimension, Equus is struggling to keep the connection with Lottie - though Sharon urges him to do so for just a little longer. Just then, Ada comes through the portal, shocking Sharon, Reim and Lily with her arrival. The sky begins to crack over the dark city as an affect of the destruction of The Courtroom Dimension, and so Sharon suggests that they all ride Equus out of the dark city while they still can. Even so, Ada doesn't stand right away, as she's too overcome by her emotions and cries over what she'd just experienced with Vincent, as the dark city destroys itself.

Within the lowest level of the Abyss, The Core laughs maniacally as she continues to send The Intention's Dolls after Alice. As Alice calls out for Gilbert, he jumps in front of her and summons Raven's wing to slice through the oncoming hoards of lesser Chains. As he does this, Gilbert thinks of how complicated their situation has become - knowing well that they can't harm The Core because they can't be sure of what will happen to the world as a result, meaning that the only thing he can do right now is protect Alice. While The Core attempts once more to claim Alice by opening into a beastly form and revealing herself to Alice, Alice puts her foot down and says that she's had enough. She attempts to plead with The Core by noting that nothing would change with The Intention even if The Core claimed her - which The Core outright denies. Frustrated, Alice insists that The Core needs to listen to The Intention, if she's really as important to The Core as she claims, and hear The Intention's wish.

The Core experiences a personal struggle because of Alice's words, but she doesn't want to have to be alone ever again. The Core remembers the first time that Lacie dove into the Abyss' lowest level and questioned what was standing before her. However, when The Core wavered as a result, Lacie apologized and apologized for her mistake - instead asking who The Core was. Her memories of Lacie prompt The Core to attack Alice and Gilbert, though they narrowly escape The Core's tendrils. While she continues to attack the two, The Core cries as she states that without Lacie by her side, she feels so cold and alone. Ultimately, all she wants is to be together with someone, who she affirms has to be Alice. At this moment, The Intention is shown in a deep sleep within her subconscious, with light radiating off of her while The Core's rampage continues.

When Alice once again looks to Gilbert for help, The Core brands him as a nuisance and pins him to the wall by stabbing her tendrils into his hand and chest. With Gilbert out of the way, The Core makes her move toward Alice, surrounding her with her tendrils in order to envelop her and ultimately join with her. At the same time, Oz uses the power of B-Rabbit once again, progressing the Incuse and finally completing its revolution. As The Core takes hold of Alice and begins to devour her, Alice thinks back to when Gilbert told her that Oz will come for her. Addressing Gilbert, Alice tells him that he was right, and that Oz will come for her very soon. Soon, Alice is nearly completely devoured by The Core, leaving Gilbert astonished as he calls out for her - helpless in his situation.

At the same time, light surrounds Oz with the completion of his Incuse, summoning forth a swirling portal of darkness from it. Everyone in the group experiences the backlash coming out from the portal's whirlwinds, but as Lottie states that The Path has opened, she reminds everyone not to get blown away - encouraging them all to reaffirm their positions. In the chaos, Oz notes how the sensation of being dragged into the Abyss reminds him of his Coming of Age Ceremony, when Xai dropped him in for the first time. Oz reminds himself that he's come such a long way since the Coming of Age Ceremony while he drifts away within his subconscious, only for Jack to grab onto Oz's hand. Looking to Oz, Jack asks if it's really okay for him to be doing "it" alone. Confirming this, Oz reveals that he's already said everything he wanted to say to Jack, bidding him farewell as he loosens from Jack's grip and drifts away from Jack's subconscious.

A light opens in the ceiling of The Intention's Domain, leaving The Core shocked as she realizes that someone is coming. At first, The Core questions if it could be Lacie coming to see her once again, but as the light transcends and the smoke clears, it appears to be none other than Oz, Lottie, Dug, Vincent and Leo. While Gilbert is overjoyed to see his young master once again, he soon comes to realize that the person before him is not Oz, but rather Jack Vessalius. Levi's thoughts prior to the Incuse's final revolution are elaborated on, as Levi states that the full revolution of an Incuse means that the Contract between the Chain and their Contractor is complete. As such, the Contractor would be dragged down into the lowest level of the Abyss, while the Chain's connection to the Contractor is severed.

Jack steps forward and apologizes for seemingly having made "her" wait for so long - waking The Intention from her slumber in the process. Finally Jack says that he'd come to see her just as he'd promised, directly addressing The Intention of the Abyss as he reaches out toward The Core. 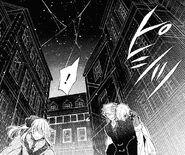 The dark city begins to collapse as a result of The Courtroom Dimension's destruction.

The Core reveals her true form to Alice and Gilbert.

The Core pins Gilbert to the wall. 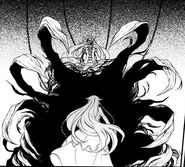 The Core prepares to join with Alice.

Oz's Incuse opens a portal to the lowest level of the Abyss.

Jack, Vincent, Leo, Lottie and Dug arrive in the lowest level of the Abyss.
Add a photo to this gallery

Retrieved from "https://pandorahearts.fandom.com/wiki/The_Nursery?oldid=62061"
Community content is available under CC-BY-SA unless otherwise noted.