Duchess of the Rainsworth Family

Sheryl Rainsworth (シェリル＝レインズワース, Sheriru Reinzuwāsu, sometimes also romanized as Cheryl Rainsworth) is the current Duchess of the Rainsworth Dukedom, and legal guardian of grand-daughter, Sharon Rainsworth. Sheryl's daughter, Shelly Rainsworth died whilst Oz Vessalius was still trapped in the Abyss after his Coming of Age Ceremony - having succumbed to an unknown sickness due to her weak constitution. Sheryl has a Legal Contract with the Rainsworths' Black Winged Chain, Owl; the Contract having been intact for at least a decade. Briefly it had been thought that Sheryl's Contract with Owl had been nullified because of the apparent destruction of the Rainsworths' Key to the Abyss, however Rufus Barma had destroyed the Barmas' Key to the Abyss and had only used Sheryl's Key to stop the flow of Abyssal power between Owl and Sheryl so that she wasn't in danger of immediate execution by the Baskervilles.

Sheryl has also been known to be life-long friends with Rufus, brought on by Rufus' love for Sheryl and dedication to keep her safe. Rufus had risked everything to protect Sheryl; attacking her with Dodo and stealing back the Barma Key and passing it off as the Rainsworth Key as part of his ruse against the Baskervilles. Sheryl has since recovered from the attack and regained full control of her Contract with Owl, currently preparing for battle against the Baskervilles.

After the battle when she and the other dukes are tried as guilty and loose their political power, Gil narrates that she often visited Rufus' grave after he had died.

Sheryl Rainsworth appears as a wheelchair-bound elderly woman in her mid to late sixties with graying caramel-colored hair and small, squinty eyes. Sheryl's hair is tied back using a series of ribbons tied in a bow, having her bangs pulled back, trailing over the sides of her face and being tied with the rest of her hair at the back of her head.

Sheryl most commonly wore a dark business vest underneath a floral-style overcoat which ended in black cuffs, a flowing dress and occasionally a shall tipped with a lining of fringe. Sheryl also wears earrings, which double as her Key to the Abyss which appear to have been pearl earrings embroidered with a thin drop-shaped piece of metal dangling down.

Sheryl's personality is cheerful at most times, often teasing those around her during their conversations. Sheryl has displayed great amounts of loyalty and bravery, as well as raw power. This type of raw power has earned Sheryl great amounts of respect and fear from those around her. One of Sheryl's main priorities also seems to be upholding the reputation of the Rainsworth family, often reminding Sharon that Rainsworths do their best to be cheerful, delicate and beautiful no matter what the circumstances are. Sheryl also has displayed that she's very concerned about the well being of her family, taking serious action when she discovered that Sharon had been kidnapped. Sheryl often acts very maternal towards other characters, focusing her care on Oz the B-Rabbit occasionally, and especially Reim Lunettes, whom she allowed to stay with her and her family for two whole years because he was afraid to return to Rufus after he'd failed his master's request.

Sheryl also seems to be a fan of the character 'Jyanta', a trait she shares with Echo and Lottie, as she has been shown to own some figurines of Jyanta as well as a small Jyanta charm.

Sheryl's preferred weapon is her harisen, which she wields right-handed, having a less complex design than Rufus' fan and a Jyanta charm tied around its handle with a ribbon.

To Sharon Rainsworth and Xerxes Break 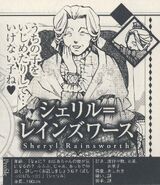 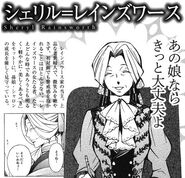 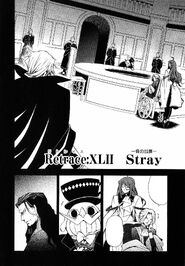 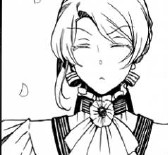 A Younger Sheryl receives a gift from Rufus Barma to symbolize their promise to one another.

Rufus gives Sheryl his Key to the Abyss 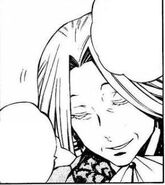 The Baskervilles arrive at Pandora

Sheryl's Key to the Abyss, which she gave to Rufus to protect

Sheryl announces her marriage to Rufus and Calum Lunettes 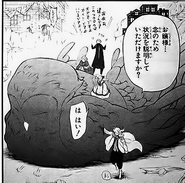 Sheryl arriving in Sablier on Owl alongside Reim Lunettes, Sharon Rainsworth and Break 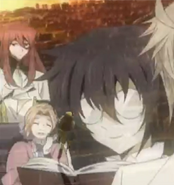 Sheryl's appearance with Rufus in opening theme of anime

Retrieved from "https://pandorahearts.fandom.com/wiki/Sheryl_Rainsworth?oldid=64005"
Community content is available under CC-BY-SA unless otherwise noted.