Duchess of the Vessalius Dukedom

Sara Vessalius was the wife of the last Duke of the Vessalius family, Oscar Vessalius. She was said to have poor health, and died in the process of trying to have a child with her husband before the beginning of the series. As of now, Sara (alongside her and Oscar's son) has been reunited with Oscar as a disembodied soul because of Oscar's death, allowing them to finally exist together as a family.

Sara Vessalius was born as the child of a commoner. Oscar lied about his social status as the heir to the Vessalius Dukedom in order to be able to meet with her in the slums of Reveil, where Oscar would spend much of his time from then on. The two had fallen in love with each other, but the Vessalius family did not approve of Oscar marrying a commoner, and so he was not given their blessing. Sara Vessalius was married into the Vessalius Family, becoming the Duchess of one of the Four Great Dukedoms. A few years after the "birth of her nephew", Oz, Sara yearned for a child of her own. However, she was known to have had a weak constitution, and became ill very easily. Despite the risk that a pregnancy posed to her own life, Sara convinced Oscar to help her have a baby of her own.

Oscar was ecstatic a the prospect of having his own child, and he purchased a camera, in part because of his fascination with photography, but also because he wanted the very first picture taken with the camera to be of his child after birth. Sometime later, Oz found Oscar alone with his camera, in the mansion, and asked Oscar to take a picture of him with it. Oscar however, politely refused, explaining how the first picture that he was going to take with the camera was that of his child.

On the scheduled day of labor, numerous valets ran to Oscar in great alarm, explaining to him that Sara had gone into labor and died, not strong enough to bear the burden of child birth. Worse still, they found out that Oscar's child had also died with her, dashing his hopes for having his own family. Oscar, grief-stricken, locked his camera in his room, not using it again until the Unbirthday party several years later. In remorse over Sara's death, Oscar ultimately decided to place the Vessalius Dukedom's Key to the Abyss in his wedding ring, keeping his Key close to him at all times.

Oscar was known to have been very attached to his camera because of the dark memories that surrounded it. Not knowing or understanding this, Oz later attempted to steal the camera from Oscar's room in order to take a picture of himself and Gilbert, who just had a nightmare. Oscar however saw him, and Oz attempted to escape by jumping out nearby window with the camera, landing on a bush below. It was in vain though, as Oscar soon caught him, slapping and scolding the boy for almost taking away the last piece he had left of his wife and child.

Following the confrontation between the Baskervilles, Oz, Gilbert, Alice and Oscar at St. Luca's Gate, Xai shoots and kills Oscar for helping Oz, Alice and Gilbert escape Pandora; Xai having admitted to always disliking Oscar to an extent, and having his plans of stealing the Vessalius Key from Oscar exposed prior to Oscar's murder.

Due to his death, Oscar's soul is seen looking through various photos, when Sara approaches him with their son in her arms. Sara questions what Oscar's doing, and upon learning that he was looking through old photos, Sara tells Oscar that it's not fair, as Oscar had promised that they would be the subject of Oscar's first camera. Oscar apologizes, grabbing his camera and joining Sara and their son as they make their leave, Oscar and Sara both professing their love for one another in the process before taking the picture of his family that he had always wanted to take.

In life, Sara had soft features, long blonde hair that covers much of her face, while at the back of her head her hair is pulled back into a short braid that trailed halfway down her back. Sara's eye color is unknown as of yet, as her eyes never appear to be "open". Sara was shown to have worn a large ballgown with a hooded shawl, lined with fringe, hanging over her shoulders.

Sara was known to have had a weak constitution. Despite this however, she longed for a child following Oz's "birth", and decided with Oscar to have one even though she knew it would be risky and that she may not have been able to live through the procedure. This showed that Sara was reckless to an extent, but all in the pursuit of happiness as she lived out what remained of her life with her ideal family: herself, Oscar and their child together. Outside of this, nothing more has been revealed of her personality. 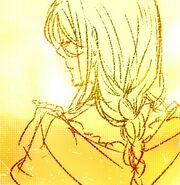 Duchess Vessalius, with black hair, and Oscar in a photo on the cover of Retrace LIV: Blank Smile

Oscar puts his arm around his sickly wife 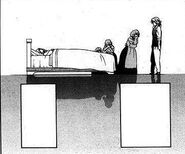 Retrieved from "https://pandorahearts.fandom.com/wiki/Sara_Vessalius?oldid=51579"
Community content is available under CC-BY-SA unless otherwise noted.