The city of Sablier was once the capital city, housing all the noble families. However, the majority of Sablier was engulfed by the Abyss , while what remained was turned to ruin that housed the poverty stricken residents. The new capital became Reveil, where the Four Great Dukedoms were established to oversee the city.

When Sablier stood in full glory 100 years ago, it was a beautiful city where many noble families lived, including the Nightrays , the Vessaliuses and a new foreign nobility, the Barmas. The Baskerville family also lived in Sablier, residing in a mansion that oversaw the entire city, as the Baskervilles were very powerful and very influential members of society. Sablier was also where one of the five Doors to the Abyss was located, in the basement of the Baskerville mansion.

Although the Vessaliuses then, were still a noble family, led by Viscount Vessalius, they were considered to be a low-ranking third rate nobility by other noble families. This changed after the third son of the family, Jack Vessalius met a young Baskerville girl named Lacie, who was a Child of Ill Omen. After their encounter, Jack took up many things, prostitution being an implied example, to rise up in society. He received help from Miranda Barma, and when the time came, Miranda told her brother, Arthur Barma, who was trying to gain favor with the Glen Baskerville of the time, Levi, that she had a musician that she could send to an event planned by Glen to allow the Baskervilles to experience the culture of the Barma family. Arthur didn't refuse and showed up with a man in costume who could play a traditional instrument from the Barmas' home country, the morin khuur. During the event, the musician threw off his costume and morin khuur, and ran to embrace Lacie. This man was Jack Vessalius, returned to reunite with his beloved Lacie after eight years. The Baskervilles knocked him unconscious and dragged him off to be interrogated. When Jack awoke, Glen and his assistant, Oswald, unearthed Jack's reason for embracing Lacie out of the blue. As things cleared up, Glen simply laughed when Lacie came to retrieve Jack, and soon Jack was allowed to come and go through the Baskerville estate as he pleased.

After another four months, Lacie was sacrificed to the Abyss by her brother Oswald, who had replaced Levi as Glen Baskerville, and Jack sinks into depression. A month later the Levi, letting himself into the Vessalius mansion, came to seek out Jack. Jack travelled with Levi back to the Baskerville estate, and Levi explained the concept of Children of Ill Omen and the chains that prevent the world from falling into the Abyss on the way. At the estate, Levi tells Jack that he'd impregnated Lacie so that she'd give birth in the Abyss. She gave birth to twins however, and while one fused with The Core of the Abyss, the other simply left the Abyss of her own accord. Levi gave Jack permission to use Alice to fufill his wish before disappearing into the shadows.

Eventually, Jack caused the Tragedy of Sablier when he used his Chain, Oz the B-Rabbit, to sever the chains that stabalized the world. Oswald used his own Black Winged Chains to stop the chains from breaking further, and had his subordinates slaughter everyone on the Baskerville estate to save them from becoming Chains when power of the Abyss engulfed the city. Sablier did fall into the Abyss, and the rippling effect from this caused what was left of Sablier to be destroyed.

Sablier is now a rundown, waste of what was once a great city. Crime occurs daily and the people living in Sablier do so in extreme poverty. Sablier is now run by Pandora, an organization formed by the Four Great Dukedoms, who had obtained the other Four Doors to the Abyss, in order to investigate the area, which was teaming with Abyssal power and Chains that emerge from The Hole. The Hole is a great maw in the centre of Sablier where a large part of the city once stood. Those who venture too deep into The Hole mutate from the exposure to the power of the Abyss that flows outwards into Sablier, a power which also creates illusions, allowing people to experience their memories.

An orphanage, The House of Fianna, was built by the Nightray family right next to The Hole, where orphans who had lost their partents as Illegal Contractors or those whose parents were devoured by Chains end up because of their connection to the power of the Abyss. These orphans' real purpose is to be bait for Chains, as they're attracted to the children, thus letting the Nightray family investigate more Chains from the Abyss. Other operations similar to this one are being done by the Barma and Rainsworth Dukedoms, although it is unknown whether or not these facilities are also within Sablier.

As the existance of the Abyss is meant to be kept from the general populace, who are lead to believe that it's all a part of an urban legend, Pandora, the King and those permitted by Pandora or the King are the only ones allowed to enter Sablier. 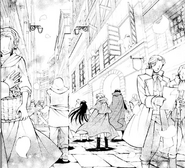 A map of the country, showing Sablier next to a city called Holder 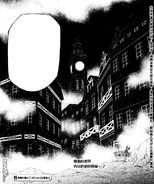 The ruins of past Sablier has materialized in the center of The Hole, shrouded in banks of ominous fog

The Chain Invasion in full-swing at Sablier

Echo, Ada and The Cook in Sablier's black city
Add a photo to this gallery

Retrieved from "https://pandorahearts.fandom.com/wiki/Sablier?oldid=62891"
Community content is available under CC-BY-SA unless otherwise noted.