Rocking-Horse-Fly is a Chain with a legal contract to an unknown Pandora member. It has yet to have a very prominant role in the manga, though the role of the Rocking-Horse-Fly was expanded for the anime of Pandora Hearts.

Vincent Nightray used Noise to control Sharon Rainsworth into using her Chain, Equus to retrieve Oz and Alice from Cheshire's dimension, leaving both Xerxes Break and Gilbert Nightray stranded in the crumbling dimension. Vincent had known that Gilbert would have to use Raven's power to traverse various dimensions in order to escape, thus unsealing Alice's powers. Noise then had Sharon use Equus to drop Oz and Alice in the middle of a meeting between the four Dukes.

Bernard Nightray sees Alice in her B-Rabbit form and immediatly accuses her and Oz as assassins sent to eliminate the Dukes. Barnard sends Pandora's soldiers after the two as they flee through Pandora's Headquarters, and one of Pandora's soldiers summons his Chain, Rocking-Horse-Fly alongside The General's Snap-Dragon-Fly when they corner Oz and Alice.

The General sends his Snap-Dragon-Fly in for the kill, while Rocking-Horse-Fly stands by, though Jack Vessalius subconsciously pushes Oz back and possesses his body, seeing how dire the situation had become. Jack then re-seals Alice's power, reverting her to her human form. Confusion breaks out among Pandora as wells as Snap-Dragon-Fly, who stopped its attack, and Rocking-Horse-Fly. The General is not phased by this as he is still aware that Alice is B-Rabbit no matter what form she may be in, and so he attempts to apprehend Oz on his own. When he reaches Oz, Jack tells The General not to touch him before kicking The General down a flight of stairs. Snap-Dragon-Fly and Rocking-Horse-Fly retreat into their contractors bodies as Jack explains that Glen Baskerville is alive and that the Baskervilles would most definately be seeking out their master, though he would use Oz's body and Alice's power to become the blade to clash with Glen Baskerville once more. The General, Reim Lunettes and all other Pandora members in attendance then bow before the hero of the Tragedy of Sablier.

While Oswald, Xai, Rufus and Lottie speak with one another, four Pandora members confront Oswald, summoning their Chains and retaliating against Oswald. Rocking-Horse-Fly is one of the Chains summoned and sent after Oswald, however Oswald is prepared to completely descimate his opposition, summoning Jabberwock in defense. Rocking-Horse-Fly is obliterated by Jabberwock, while his contractor is simply slammed into the concrete and killed when his body is crushed by Jabberwock.

Rocking-Horse-Fly appears as a white rocking horse-like Chain with large eyes with spiral-shaped irises. It is very angular in shape, making it look as though it has actually been directly cut from wood. Rocking-Horse-Fly also has 2 pairs of large transparent insect wings. 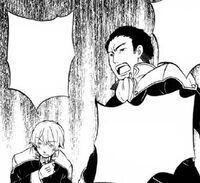 Rocking-Horse-Fly is summoned to attack Oswald 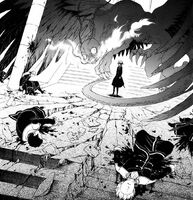 Retrieved from "https://pandorahearts.fandom.com/wiki/Rocking-Horse-Fly?oldid=63239"
Community content is available under CC-BY-SA unless otherwise noted.