Reverberate is the title of the ninty-eighth chapter of Jun Mochizuki's Pandora Hearts.

To start, while being carried by Cheshire, Alice asks what's going on with The Intention right now.

In the heart of the Abyss, The Intention lays among her toys, only to hear a song with a familiar sound. The kind of melody that's both gentle and nostalgic, a song that was for the Alices a long time ago. Suddenly, The Intention sees someone (Lacie) behind a curtain nearby. Though The Intention attempts to ask the person who they are, they turn and leave, and as The Intention reaches out for her mysterious visitor, the world around her begins to crack. As her world collapses, The Intention covers her eyes and asks that she not lose her world alongside the 1st Dimension as she plummets alongside the fragments of her world.

In Sablier, Pandora has retreated, only to find another Chain devouring a child. As the Pandora members decide that there are too many Chains for them to deal with, Sheryl notes how grim the situation has gotten, saying that their cause appears to be hopeless and that as it stands, their world really does seem to be done for, the Chains of the World visibly shattering all around her. Just then, a large crevice tears its way through the streets of Sablier, piquing the interest of Phillipe West - who looks to the fray outside from a window in The House of Fianna.

Reim manages to wake Sharon up, which Lily is glad to see, requesting that Sharon summon Equus to help her and Bandersnatch fend off the Chains that are closing in on them. However, Sharon remembers that she placed Equus in Lottie's shadow, explaining to Lily that she can't use Equus, upsetting Lily because Bandersnatch is the only one that can fight. Suddenly drawn to Break's corpse, Sharon feels an immense sadness come over her, only to have Reim pick up Break's body and tells Sharon to stand up, asking whether or not she understands that they have to live in order to properly take care of Break's body. Standing, Sharon asks what happened to the Courtroom Dimension, though Reim is just as confused as she because the entrance simply disappeared. Overwhelmed by the situation, Sharon tries to concentrate in order to contact Lottie through Equus to learn about the situation on her end, knowing that Lottie had gone further into the inner parts of the Courtroom Dimension. As Lottie and Dug run through the Tragedy of Sablier, Lottie stop suddenly, prompting Dug to ask her what's wrong. Lottie asks if Dug can see it too, that Equus has clung to her shadow without her even realizing it. Sharon's voice reaches Lottie in broken pieces in her head, confusing Lottie briefly. After Sharon clears the connection, she asks where Lottie and Dug are now, to which Lottie explains that they're in Sablier from more than 100 years ago, having been dragged into it against their will, though currently thy're still looking for Noise. Suddenly, Lottie hears a familiar voice call out to her, glad to see that she's all right. The voice came from none other than Fang as he approaches the version of Lottie that existed at that moment in time. Shaken, past Lottie asks if something's happened, which Fang confirms; elaborating that the Baskervilles who'd been reporting to Oswald had been slaughtered. Finding such a suggestion to be ludicrous, past Lottie asks for clarification, and so Fang explain that the site of the attack makes it look like their colleagues were attacked by a Chain. Baffled, past Lottie asks if Fang's suggesting that an outside Contractor has infiltrated the estate, to which Fang says is a possibility. However, Fang also suggests that the only other alternative is that the massacre was done by one of their colleagues. Hearing this, Lottie snaps at Fang, telling him not to even suggest something so foolish, questioning the meaning behind their current situation as she does so.

Suddenly, Lottie's feels Jabberwock's power within her heart, Dug asking if she'd felt it too, which Lottie confirms as she urges them to carry on and not continue to be distracted by their pasts. As past Lottie begins to cry, Fang moves in to console her, prompting Lottie to think of how Sablier used to be the place where everyone spent their time together, herself, Fang, Dug, Lily, Oswald and even Jack, though just thinking about Jack makes Lottie's blood boil.

Having fled the scene after Oswald retaliated against Miranda, Jack grows weary and has to stop and rest; dropping Gilbert down onto the floor in the process. Chuckling to himself in a worn out state, Jack couldn't help but wonder why Oswald wasn't coming after him. Knowing the there's no way Oswald will ever be able to forgive him, Jack was sure that Oswald would've begun his pursuit right away. The Jack realizes that Oswald might have something more pressing than exacting his revenge, but since he'd already destroyed Jack's wish Jack wonders what could be left for Oswald to do. Then it comes to Jack, Oswald might be planning on killing Alice in order to sever his ties to The Intention, which would mean he could never do anything for Lacie's sake ever again. As Gilbert barely clings to consciousness, Jack things of how Oswald won't hesitate anymore, so even though he'd brought Gilbert along with him, there's no way he can use Gil as a shield anymore. Apologizing to Gilbert, Jack says that he has to go back and confront Oswald once more, leaving Gil alone in the burning estate. Rushing toward Alice's tower, Jack thinks of how a world without Lacie in it is a place that no longer has hope or even despair. Because of this, Jack vows that nothing's going to stop him from reuniting with his beloved Lacie once again, and if he can't do that then he'll instead deliver the world that Lacie loved so much to her in the Abyss.

Entering the room where Oz, Gilbert, Ada, Vincent and Noise are, Lottie and Dug find that Echo is in control of Noise's body and that she's collapsed on the floor with Oz crouched down beside her. Echo's body has already begun to deteriorate, with her legs having degraded into sand, prompting Echo to explain that whether or not she'd stopped Duldee, Noise's body and soul had already reached their limit. Echo tells Oz that even the Baskervilles, whose lives are much longer than those of regular humans, have an end, and in Noise's case that end is coming very quickly. Wile it's unlikely that Duldee was oblivious to the fact that Noise's body had reached its limit, yet even so she tried to steal Noise's body for herself, only for Echo to suggest that maybe Duldee was thinking of what was best for Noise when she tried to kill Vincent. Gripping onto Oz's coat, Echo explains that she really doesn't understand it and whether or not that was good enough, but she'd anticipated as much because something as simple as an answer is never easy to grasp. Furthermore, Echo states that for that reason, Oz has to stick to those things that are most precious to him and those things that he'd unyielding about; asking Oz for confirmation that he'll do just that. When Oz confirms that he will, Echo's hand crumbles and she slumps down into Oz's arms for support. Finally, Echo states that she'll take Noise with her when she leaves, so that they can do so together, grasping Noise within their subconscious as their souls are surrounded by he Droplets of Light. Oz breaks down in tears as he admits that he'd never properly conveyed his gratitude to Echo for everything she'd done with him on St. Bridget's Day, specifically remembering the fireworks and the hair ornament he'd given her, all the things that made him happy. When Echo starts to lose consciousness, Oz tries to regain her attention, finally calling her "Echo" rather than "Echo-chan". Amused, Echo's happy to see that Oz actually can say her name properly, and while Oz's usual mispronunciation makes her feel a little uneasy, Echo ultimately decides that at the same time, it's not so bad. Echo's body then disintegrates in entirety, leaving behind only her Baskerville cloak, making Oz remember all the time he'd spent with Echo.

Still rather dazed, Vincent looks over to Oz as asks if Noise died, tears still rolling down his face to which Ada bears no response as tears well in her eyes. Looking to the floor, Vincent calls Noise a stupid girl, claiming to have not really cared about her, as he was only using her because she would willingly do anything he asked, and yet Noise still went on and died on her own; something Vincent calls foolish. Ada Breaks down in tears over top of Vincent, the two crying together and mourning the loss of Echo and Noise in their own ways.

Gripping Noise's Baskerville cloak, Oz sobs over Echo's death, prompting Gilbert to ask him if he's going to be all right. Oz then puts on the Baskerville cloak in honor of Echo, urging everyone to hurry, as they have to stop Oswald.

Oswald races after Cheshire, finally managing to catch up to him so that he can cut through Cheshire's back, leading Cheshire to drop Alice. Cheshire then proceeds to battle Oswald again, though this time they're outside of Alice's tower. Seeing Alice's tower makes Oswald realize what Cheshire and Alice had planned on doing, as they were going to try and contact The Intention through Alice's past self, just like Jack did during the Tragedy of Sablier. As the fight continues, Oswald thinks of how he'll never be able to forgive himself for being so blind more than 100 years ago, wondering why he wasn't able to see that Jack's heart had always been corrupted. Suddenly, a twig snaps in the forest nearby, prompting Alice to ask whether or not someone's there, only to have a confused Jack emerge from the forest, transfixed on the scene before him.

Characters In Order of Appearance

The Chain invasion starts getting out of hand 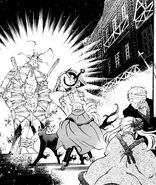 Lily and Bandersnatch fend off Chains while Reim wakes Sharon 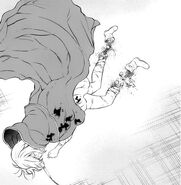 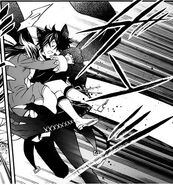 Oswald attacks Cheshire from behind 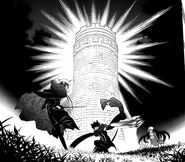 Oswald and Cheshire prepare to battle in front of The Tower

Jack arrives at The Tower
Add a photo to this gallery

Retrieved from "https://pandorahearts.fandom.com/wiki/Reverberate_(Chapter_98)?oldid=51007"
Community content is available under CC-BY-SA unless otherwise noted.