Reveil is the capital city in the main setting of Jun Mochizuki's Pandora Hearts series.

After the Tragedy of Sablier, Reveil was made the new capital city in order to allow people to try and rebuild their lives and carry on with newfound peace and security. There, four noble families came together to form the Four Great Dukedoms, obtaining four of the five Doors to the Abyss to solidify their position above the other noble families. This action caused a long period of great unrest and conflict, as other noble families such as the Sinclairs grew to hate the Four Great Dukedoms because of their unconventional protection from the state, while some simply aligned themselves with the Four Great Dukedoms to take advantage of their powerful position. Sometime during this period, the Sinclair family's eldest daughter was assassinated, likely by another noble family. This led to the youngest daughter becoming an Illegal Contractor and sacrificing her entire family to her Chain, only to be dragged into the Abyss, thus wiping out the Sinclair Family. In an alternate timeline, the entire family was eradicated four years earlier, having been murdered in their own home by "thieves," while the family's knight, Kevin Legnard, was away with the youngest Sinclair daughter, although the act was likely the doing of another noble family.

Together, the Four Great Dukedoms formed the organization, Pandora, whose purpose was to study the Abyss, obtain the Intention of the Abyss, and prevent another event like the Tragedy of Sablier from ever happening again. The Dukedoms, which consisted of the Nightray family, the Vessalius family, the Rainsworth family and the Barma family, all relocated their residences from Sablier to Reveil and turned a large building which had previously belonged to the Baskervilles, into Pandora's headquarters.

After Oz's return from the Abyss and eventual meeting with the Intention of the Abyss, Gilbert Nightray brought Oz and Alice to his townhouse in Reveil to rest. The next day, Gilbert received a message from his brother, Vincent Nightray, about a mission and the trio went into town to buy food for dinner but encountered trouble when an Illegal Contractor appeared. Grim and William West faced off against Oz, Alice, Gilbert, as well as Vincent's servant, Echo. Vincent later killed William, and brought all of them to the Rainsworth mansion. The next day, Oz, Alice and Gil returned to Reveil to search for Gil's missing hat, which was in the possession of a small gang. They had an arm wrestling competition to win the hat back which, with the help of Oscar Vessalius, they eventually did. Alice, however, was later kidnapped alongside Break by the Cheshire Cat and the two were taken to his own dimension. Break, planning for this to happen, left Emily behind as a clue for Oz.

St. Bridget's Day was a day in Reveil where the city organized a festival in order to commemorate the angel, St. Bridget, who had come to Earth after falling in love with a human. People would don blue feathered outfits and spend the day pretending to be someone else. It was customary for people to give a blue feather to someone they cared for. During this day, Oz and Alice were brought into town by an attendant from Pandora, though while he was distracted by Alice's antics, Oz met Echo and the two spent the day together. On this day, Bernard, Bernice, and Vanessa Nightray were all way from the Nightray mansion, allowing Gilbert to visit without having to worry about being forced to stay by his adoptive family. There he had a talk with Vincent, who proceeded to instill poisonous thoughts into Gil's mind. Meanwhile, Echo and Oz watched the fireworks together, and at the end of the festival, Oz gave Echo a blue feather, not knowing that it symbolized his affection. Echo began to leave, embarrassed, but Oz caught up and thanked her for saving Sharon's life. As she replied though, Oz's Incuse moved forward, and Echo was caught in the power rippling out of it, causing both of them to fall unconscious.

Oz, Gilbert and Alice were given a day off and went to enjoy themselves in Reveil during a festival involving pink flower petals and empty birdcages. They later met Leo, Vincent, and Echo, and during the encounter, Leo summoned his Chain, Jabberwock, and attempted to send Oz back to the Abyss after Oz refused to join him. Gilbert managed to save Oz from the Chains of Condemnation and summoned Raven to counter Jabberwock. The two fought until the battle wore Leo out, causing Vincent to take over the battle, summoning Demios to fight Raven while he personally fought his older brother. After chasing Leo through Reveil and realizing his deception, Oz, riding Equus, along with Gilbert and Alice, returned to Pandora headquarters.

Leo, Echo, and Vincent followed them with Jabberwock, and Leo attempted to draw Oz out so they could continue their fight. Oz used B-Rabbit's scythe to cut off one of Jabberwock's hands, but he refused to fight Leo, insisting that the two of them were friends. Leo argued that they weren't friends and that they only happened to meet because of Elliot Nightray. This angered Oz, who stated that he didn't care about that, because he didn't regret meeting Leo, mentioning how if Elliot could see Leo right now, he'd punch him. Oz then punched Leo in the face, causing Leo to see the error of his ways. While things simmered down, Jack took over Oz's body and used B-Rabbit's Chains to impale Leo. Jack attempted to finish Leo off, however Oz refused and stopped him. Alice arrived on the scene and drop-kicked Jack because she had heard Oz cry out for her like he had in Sablier. She ordered Jack to get out of Oz's body, stating that she was the only one allowed to make Oz cry.

Jack asked Alice if she intended to get in his way again, telling her that there was a misunderstanding, as Oz was his Chain, and that if Alice were to leave Oz's body, she would disappear. He stated that it wasn't he who needed to leave Oz's body, but her. Jack then used B-Rabbit's power to try to kill Alice, but she was saved by Echo. Jack noted that because B-Rabbit's power hadn't fully matured yet, using it tired him out. Jack then slammed B-Rabbit's scythe into the ground, making the Chains that prevent the Abyss from engulfing the world visible. Jack then proceeded to use Oz's powers to sever the chains, just as he had done 100 years ago in Sablier. This caused an explosion of light as well as earthquakes throughout Reveil. Jack then disappeared as he had fulfilled his desire to sever the chains, leaving Reveil to fall into the Abyss and the entire world to follow. 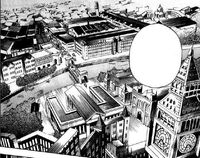 Reveil panorama from the top

A view of Reveil's street 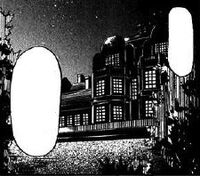 Reveil's train station
Add a photo to this gallery

Reveil panorama at the day, view from the top

Reveil panorama at the night 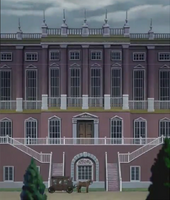 A panorama of Reveil city 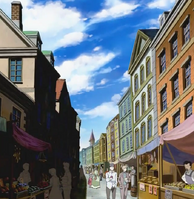 A market in Reveil

A street gang in the Reveil, near the market

Another panorama of Reveil

A hotel in Reveil

Another view streets in night

Another view streets with view of some buildings in Reveil

Retrieved from "https://pandorahearts.fandom.com/wiki/Reveil?oldid=62970"
Community content is available under CC-BY-SA unless otherwise noted.