Owl is one of the Black Winged Chains which act as the guardians of the Doors to the Abyss. Previously, it was necessary for each incarnation of Glen Baskerville to form a Contract with Owl and her fellow Black Winged Chains , though following the fall of the Baskerville Clan after the Tragedy of Sablier, the Door which Owl protects was given to the Rainsworth Dukedom alongside the establishment of the Four Great Dukedoms. Owl has since formed a Contract with each head of the Rainsworth Dukedom over the course of close to 100 years, including Sheryl Rainsworth. Due to the dissolve of the power held by the Four Great Dukedoms after Jack Vessalius' second attempt to destroy the world - it is likely that after the death of Sheryl Rainsworth that Owl returned under the Baskerville Clan and served under Leo's successors.

Owl, in her standard form, appears as a simple owl with black feathers; closely resembling a barn owl in regard to her lack of visible ears, facial structure and feet. As Owl possesses the ability to change her size, Owl can grow large enough to carry several people on her back - though her overall physical appearance does not change.

As one of the Black Winged Chains, Owl acts as the guardians of one of the five Doors to the Abyss. As such, each incarnation of Glen Baskerville forms a Contract with Owl in order to access Owl's Door to the Abyss. Owl is always the second of the Black Winged Chains to be Contracted, following Raven but preceding Dodo, with the Succession Ceremony taking place roughly 5 years after a new prospect Glen has been inducted into the Baskerville Clan. As such, Owl had formed a Contract with Levi, as well as Oswald during their respective second Succession Ceremonies, and his powers were used to summon the Chains of Condemnation to drop Children of Ill Omen, such as Lacie, into the Abyss following the final Succession Ceremonies for both incarnations of Glen; as per Jury's instruction.

Long after Lacie was dropped into the Abyss, Jack Vessalius instigated the Tragedy of Sablier by severing the Chains of the World with the Chain B-Rabbit. As a result, Oswald summons his Chains, Raven, Owl, Dodo, Gryphon and Jabberwock, sending them to mend the Chains before they can be further damaged. It is because of the efforts of the Black Winged Chains that only a large portion of Sablier was dropped into the Abyss rather than the world as a whole. However, because Owl and the other Black Winged Chains were mending the Chains of the World, Oswald had no means of defending himself against Jack and B-Rabbit and was ultimately killed as a result.

Sadly, since Oswald and Alice were the only ones to know of Jack's deception, and since both of them had died during the Tragedy of Sablier, Jack was able to pin the blame for the Tragedy on the Baskerville Clan, then proceeding to steal four of the five Doors to the Abyss and establish a new hierarchy of power called the Four Great Dukedoms because of it. Dodo's Door was given to the Rainsworth Dukedom due to their royal lineage and uninvolvement in any regard to the Tragedy of Sablier. Following the Tragedy, each head of the Rainsworth Dukedom has formed a Contract with Owl in order to allow the Dukedom access to the Abyss through their respective Door.

More than 80 years after the Tragedy of Sablier, Duchess Sheryl Rainsworth formed a Legal Contract with Owl. Sheryl would then place Owl's Key to the Abyss within a silver locket for safekeeping. Soon after, to form an alliance with Duke Rufus Barma, Sheryl entrusted him with Owl's Key, after he'd entrusted her with Dodo's Key, ensuring that neither of them could betray one another in the future.

Sheryl had been strolling through the garden at Pandora's Headquarters with Rufus Barma whilst Oz, Alice and Gilbert were in Reveil taking part in a celebration of sorts during an unknown festival. While the two speak, Sheryl asks Rufus what he's scheming. Rufus asks what Sheryl means, and so Sheryl tells Rufus not to play innocent, correcting herself instead and asking what is weighing so heavily on his heart - having noticed Rufus' worry as they spoke. When Rufus doesn't answer her, Sheryl reminds him that they promised that the Rainsworths and Barmas would work together to do whatever it takes to prevent another event like the Tragedy of Sablier from happening, stating that, evil schemes aside, she wants to know what Rufus is worrying about. Rufus goes to answer Sheryl, but the Baskervilles emerge suddenly, having grown tired of waiting and revealing that Rufus is acting as their ally. Rufus then concentrates Dodo's power to his bladed fan and slices through Sheryl's torso; allowing Rufus to steal the Key to the Abyss that Sheryl possessed.

While Rufus proceeds to lead the Baskervilles into the catacombs of Pandora to the fourth Sealing Stone, Sharon Rainsworth and Xerxes Break rush out - having heard the impact of Dodo's power on Sheryl. While being tended to by Pandora members and barely clinging to her consciousness, Sheryl apologizes to Break and Sharon, telling them that Rufus had stolen the Rainsworth Key because of how she'd been caught off-guard. Sheryl then gives Sharon a thread that she had Owl weave, which connects directly to Rufus. Break goes ahead of Pandora and follows Owl's thread to find Rufus and the Baskervilles, while Sharon later gives Owl's thread to Oz for him to follow and help Break. Leo arrives and begins an attack on Pandora using Jabberwock, in order to draw out Oz. In order to allow himself a confrontation with Leo, Oz gives Owl's thread to Gilbert, Gil leading numerous Pandora members as they follow the thread to the chamber of the fourth Sealing Stone.

Later, after the fourth Sealing Stone had been destroyed, the battle was taken outside of Pandora's Headquarters. Here, Rufus takes Sheryl's Earrings and summons Dodo; having Dodo use its power in order to destroy the Key held within them. Although everyone believed that this was the Rainsworth Key, it was actually the Barma Key - a secret that only Rufus and Sheryl had knowledge of. At the same time, Rufus uses Sheryl's Silver Necklace (which held the real Rainsworth Key) to negate the flow of Abyssal power into the Rainsworth Dukedom's Contracts - meaning that Sheryl, Break and Sharon could not use Owl, Mad Hatter and Equus, thus fooling the Baskervilles into believing that the Contracts were voided.

Sheryl, Sharon, Break and Oz are all apprehended by the Baskervilles, Sheryl and Sharon being confined to a room within Pandora's Headquarters. Sheryl wakes from her slumber, wondering what's happened, yet still encouraging Sharon to be strong. Sheryl then notices the broken connection between her and Owl, asking Sharon to explain, in detail, everything that's happened while she's been unconscious.

After Oz escapes his confinement within Pandora, Sheryl is gathered in Pandora's grand hall alongside Break and Sharon - the Baskervilles intending on executing the three of them if Oz fails to return to Pandora. The Baskervilles eventually grow impatient, believing that Break is too dangerous to be left alive until the scheduled execution time. One Baskerville begins beating Break, punching and kicking him extensively and not wanting to wait until the "Rainsworth Key" reforms with Break's Contract with Mad Hatter alongside. Dug is insistent that they wait, but the beatings continue. Sharon can't stand to allow the beatings to continue, breaking away from the Baskerville holding her and protecting Break, only to be slapped to the ground by the Baskerville leading the beating. This enrages Break, and at that moment, Sheryl feels her Contract with Owl reconnect, as Reim Lunettes had used the Rainsworth Key to allow the flow of Abyssal energy into the Rainsworth Contracts to resume. Sheryl smiles, knowing that Rufus was planning on doing something like this, with Break summoning Mad Hatter and killing the Baskerville that slapped Sharon.

While Break continues to fight by murdering Baskervilles with Mad Hatter, and Sharon takes over using Equus to spare Break's physical destruction from his Contract, Sheryl summons Owl. Sheryl has Owl release a black haze from its wings, shrouding the Baskervilles and taking away their ability to see and hear in their surroundings in order to help Break during his battle. Owl then returns to Sheryl's side, fading back into Sheryl's body while the fight continues.

Later, after Noise has forced Xai Vessalius to take her to Sablier using Gryphon (all while holding Ada Vessalius hostage), numerous Pandora members arrive to attend to Sheryl's needs. Sheryl asks to be briefed on the current situation in Reveil, also sending messengers to every organization in Reveil, not caring if her name is given in the process. Meanwhile, Sharon rushes to Break's side, having left to make preparations Sheryl requested. Sharon reminds Break that she'd told him to rest after his strenuous fight with the Baskervilles, informing break that she'd found his coat and sword in the process. Sheryl then calls upon Break and Sharon, asking Sharon if everything she'd asked for was ready, which Sharon confirms. Sheryl then states that they still need to go to Lutwidge Academy before they travel to Sablier, claiming that they're going to fly there. This confuses Sharon, when all of a sudden Break collapses. Sheryl summons Owl, with Owl growing in size immediately in order to transport Sheryl, Sharon, the unconscious Break and Rufus' valet to Lutwidge.

Upon arriving at Lutwidge Academy, Reim is scared when he lays eyes on Owl's larger form. Sharon, Sheryl and Rufus' valet tend to Break as they file off of Owl. Owl shrinks back down to her smaller form and fades back into Sheryl's body, allowing Sheryl some time to rest and enjoy some tea whilst everyone prepares for their impending journey to Sablier. Once finished her tea, Sheryl announces that it is time for them to go, and so she summons Owl once more and has her grow. Sheryl, Sharon, Break, Reim, Oz, Alice and Gilbert then climb onto Owl's back, and hold on while Owl carries them all to Sablier.

Once in Sablier, Owl rests while everyone climbs off of her. Reim voices how he prefers the larger version of Owl when she's resting because she's docile, calling Owl a good girl. Soon after, Reim then watches as Owl shrinks down once more, both in a sense of awe and nervousness. As soon as Owl has fully shrunk down, Reim picks her up and carries her around with him while everyone bids their farewells to one another. Reim returns Owl to Sheryl's shoulder when Oz, Alice, Gil, Break and Sharon head into Sablier to face Oswald, while he and Sheryl join with Pandora's Sablier unit to fight against the Chain invasion going on presently.

After the Chain invasion is halted, the Abyss is restored to its original state and the world is saved from destruction, the Four Great Dukedoms are stripped of their power - taking the blame for Jack's attempt to plunge the world into the Abyss. Despite this, all the Contracts in place seem to have been maintained, meaning that Sheryl's Contract with Owl likely continued on until her demise. Following Sheryl's death, it's likely that Owl would have returned to serving alongside the Baskervilles - as they had reinstated their relationship with the Abyss - likely eventually forming Contracts with Leo's successors as Glen Baskerville.

Owl shrinks down to her regular size 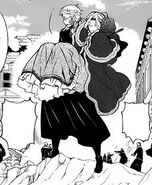 Retrieved from "https://pandorahearts.fandom.com/wiki/Owl?oldid=54914"
Community content is available under CC-BY-SA unless otherwise noted.