Orphan II is a placeholder name for a prominent orphan who resided in the House of Fianna in Sablier. He and his sister contracted with Humpty Dumpty because of Isla Yura's use for them in his Cult, as well as Bernard Nightray's intrigue with Humpty Dumpty. It is not known if Orphan II survived Humpty Dumpty's death or died with it .

Orphan II and his sister were brought to The House of Fianna after their parents were killed by a force from the Abyss, probably a Chain, thus allowing them to attrack Chains to themselves. So Isla Yura and the Nightray Dukedom worked in partnership to experiment on the ignorant Orphan twins.

When Elliot Nightray and John returned from The Hole Illegally Contracted to Humpty Dumpty, Isla Yura and Bernard Nightray saw an oportunity to use Humpty Dumpty's ability to contract with more than one person to their advantage. They tricked the orphans into drinking a "special elixir" (Humpty Dumpty's blood) that would banish their painful memories, and sing a song that contained Humpty Dumpty's name, thus sealing the Illegal Contracts.

The twin Orphans later appeared when Elliot and Leo brought Oz, Alice and Gil to the House of Fianna after Phillipe West attempted to steal Oz's wallet. As soon as the two of them see Oz they rush up and hug him, exclaiming about how their "Golden haired brother had returned", confusing Oz and Mrs. Finn, as he had never been to the House of Fianna or met with the two Orphans before in his life.

Orphan II and his sister are once again seen arriving at Oz's Second Coming of Age Ceremony behind Phillipe laughing at something, the sight of the Orphans at the Coming of Age Ceremony causes Oz to run after them, but he doesn't reach them in time before they dissappear. They emerge together later in the night, escorted by members of Isla Yura's Cult, being the only orphans released into the mansion apart from Phillipe (who's meant to lead Oz to the Sealing Stone after decapitating a Pandora member with his Humpty Dumpty). Orphan I summons her Humpty Dumpty and decapitates one of Isla Yura's valets when he approaches her and Orphan II.

After chaos breaks out in the ballroom and the guests are trapped within the mansion as Isla Yura's Cult sets the mansion on fire, Orphan I and her brother aid in sacrificing the guests as part of Isla Yura's ceremonial feast to re-enact the Tragedy of Sablier. Soon Hans comes down to the mansion's main level, looking for a way out for Vanessa and Elliot, however he's intercepted by Orphan I, who has her Humpty Dumpty decapitate Hans. Leo witnesses Hans' death and goes to warn Vanessa and Elliot.

Vanessa Nightray was murdered shortly afterward by the Head Hunter and Break had just accused Elliot of being the Head Hunter as Elliot was the only one around when he felt the Head Hunter's presence. While Gil and Break argue about Elliot, another assassination occurs on the level above them and so Break drops his accusations and chases the assailiant. As Gil helps Elliot up, the two are confronted by Orphan I, with her Humpty Dumpty already summoned, and Orphan II. The two Orphans now in a hypnotic state due to their illegal Contracts with Humpty Dumpty.

Gil shoots at Humpty Dumpty twice, both bullets ricochet off of its tonge, before Elliot stops Gil from firing any more shots, as they Orphans were only children. The two then drop as Humpty Dumpty's tongue smashed through the wall behind them. Orphan II decides that the two of them are too troublesome, and so he decides to summon his own Humpty Dumpty to deal with them. Just then the two are knocked out from behind by Echo. Vincent decides to plunge them into a deep sleep with Dormouse, even though killing them would've been safer, to keep them out of comission. It is unknown if Orphan II survived or not after Humpty Dumpty was killed by Elliot.

Orphan II is a young orphan boy with light-coloured hair cut into a bowl shape so that it sits close to his head, curling inward at his forehead. Judging from his appearance he is around 9 years old.

Much like all other orphans, he appeared happy all the time as Humpty Dumpty banished all his painful memories.

To Oz the B-Rabbit

To Elliot Nightray and Leo 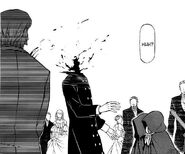 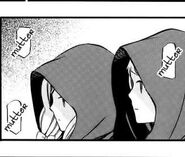 The Orphans hyponotized by Humpty Dumpty

Retrieved from "https://pandorahearts.fandom.com/wiki/Orphan_II?oldid=47841"
Community content is available under CC-BY-SA unless otherwise noted.