The Nightray Dukedom (ナイトレイの公国, Naitorei no Kōkoku) or The Nightray Family (ナイトレイの家族, Naitorei no Kazoku) is currently one of the Four Great Dukedoms that rule over Pandora's country, trumped in power only by the king.

The Nightrays were once close allies with the Baskervilles, Duke Raymond Nightray having been a close and trusted companion of Oswald, the Glen Baskerville of the time. Following the Tragedy of Sablier, Jack Vessalius invited the Nightrays to join the Four Great Dukedoms because he wanted to be able to keep an eye on his enemies. Also, Jack accused Raymond of being a traitor, having allegedly helped rebels safely out of Sablier during the Tragedy to avoid conviction.

This was untrue, but because of Jack's title as the hero of the Tragedy of Sablier, nobody questioned him. Jack also gave Raymond and the Nightrays a Door to the Abyss which was guarded by Raven, whom Jack knew wouldn't form a Contract with anyone because of Raven's connection with Gilbert, who was, at the time, in the Abyss, and so it was Jack's intention for the Nightrays to never be able to access their Door to the Abyss.

It has been clearly stated that they are the enemies, opposites, or rivals of the Vessalius Dukedom. The Nightray house is considered dark and evil due to their previous closeness with the Baskervilles 100 years ago, whereas the Vessalius house is considered "the light" due to being thought of as the heroes of 100 years ago. Currently, the family line is now extinct, with all those born as a Nightray deceased.

Some of the Nightrays shares many same of physical appearances features, like black and light-beige hair. In addition, along the series, most of the Nightrays seems to had favor in wear dominant darkly-coloured or grey or black clothes or accessories, as same with their presence which knowing by others as the 'dark' in nobility world in Pandora Hearts universe. (This is could seen easily in Raymond, Gilbert, Vincent, Fred, Claude, Ernest, Elliot and Vanessa's dressing way. The same thing also done by some of their valets, like Hans.) 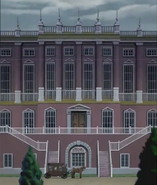 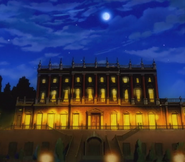 Nightray Dukedom at the night with a party held inside

A view of a garden in the estate in night

Another interior of a corridor in Nightray Dukedom estate

Dug, Fang & Lottie in a room in Nightray Dukedom estate

At a fish pond
Add a photo to this gallery

Retrieved from "https://pandorahearts.fandom.com/wiki/Nightray_Dukedom?oldid=59016"
Community content is available under CC-BY-SA unless otherwise noted.