'Lacie's Chain' is the placeholder name for the Chain that Lacie used when two traffickers put her's and Jack Vessalius' lives in danger after meeting for the first time in Sablier. Lacie's Chain's contract with Lacie was nullified following Lacie's death, however, it would later become the inspiration behind a Chain that Jack had manipulated the Intention of the Abyss into creating, Oz the B-Rabbit.

At an unknown point, Lacie contracted with an unknown Chain while still at a young age.

After getting into a fight with her brother Oswald, Lacie ran away from the Baskerville estate and wandered aimlessly through Sablier. She then came across a begger named Jack and the two became friends rather quickly. As Lacie ran with Jack Vessalius through the streets of Sablier while singing her sorrowful melody, she attracted the attention of two traffickers. They followed her and Jack into a forest outside of Sablier where they attacked. Jack was pinned to the ground by one of the traffickers, while the other held Lacie up off the ground from her neck.

The trafficker holding Jack down told his partner not to hurt Lacie, which made the trafficker holding Lacie scoff, saying that he wouldn't as he'd heard that rich people paid through the nose for Children of Misfortune like Lacie. Lacie then told her assailiant that he stunk and was ugly, angering him and causing him to throw her to the ground. Jack calls out for Lacie in alarm, but he gets his face pushed back into the ground almost immediatly afterwards. Lacie explained that she wasn't going to use her powers because her location could be traced when she did, but the traffickers had dared to hurt her Jack. Lacie then summoned her Chain, who used bladed-chains to dismember the two traffickers. Jack looked up in horror as Lacie danced in the traffickers blood while her Chain faded back into her body.

Suddenly, the Baskervilles had surrounded Lacie and Jack, one scolded Lacie for summoning her Chain, but was grateful that they had finally found her. Lacie then left Jack after giving him one of her earrings to remember her by. Lacie was never shown to use her Chain again, and what exactly happened to it is unknown.

When Jack Vessalius approached Lacie's daughter, The Intention of the Abyss, through Lacie's other daughter, Alice's body, he asked for a Chain that could sever the chains that were preventing the world from plunging into the Abyss. The Core of the Abyss had earlier taken over Alice's body and told Jack that the Intention couldn't use her own power to do such a thing herself as it would destroy Alice. Jack lied to the Intention and told her that the whole reason he wanted to send the world into the Abyss was so that he could meet the Intention personally, which excited the Intention. However Jack's real reason for this was to bring the world that Lacie had loved so much into the Abyss, which Jack believed Lacie was now a part of, despite the fact that her existence had been obliterated. The Intention drew a picture of Oz, the stuffed rabbit with a consciousness that had always been by her side since the beginning, and so Oz would be the perfect Chain for Jack. The fact that Oz was a rabbit reminded Jack of Lacie's Chain, and so he told the Intention that it would be an honour to have a Chain so similar to Lacie's.

Any further powers which Lacie's Chain may have had are unknown. 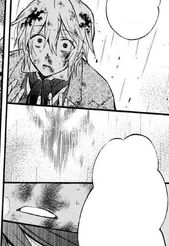 Retrieved from "https://pandorahearts.fandom.com/wiki/Lacie%27s_Chain?oldid=52816"
Community content is available under CC-BY-SA unless otherwise noted.