Retrace XCVII: I am

I am is the title of the 97th chapter of Jun Mochizuki's Pandora Hearts.

For a brief moment in time, Oz, Gilbert and Vincent are drawn away from their fighting as Noise enters the room, completely under Duldee's control; stating that if she can't have Vincent, then she'll destroy everything, including Vincent.

Within Noise's subconscious, Duldee is ecstatic and laughs maliciously at her triumph over Noise. Seeing that Echo is horrified, Duldee attempts to justify her actions to Echo by explaining that Noise no longer has the will to act as her Contractor anymore. This meant that Noise couldn't control Duldee, who believed that Noise was merely keeping her bound before, anymore. Now, Duldee could simply tangle Noise in her strings and influence her mind by whispering to Noise, and Noise would do as directed helplessly and without question; making her more like a marionette than a human as she is now. Echo doesn't approve however, and insists that she won't allow Duldee to purposefully influence Noise's heart any longer. Angered by Echo's disobedience, Duldee demands that Echo explain herself, wondering what happened to Echo because by saying things like that she sounds almost like a human. Laughing, Duldee commends Echo because she's the oldest incarnation of Duldum, but rationalizes that Echo must've been broken somewhere along the line just like those before her. Submerging Echo in the waters of Noise's subconscious, casts Echo into a "disposal zone", admitting that Echo had worked so very hard during their time together and promising to become great friends with Echo's replacement.

Concerned, Noise ran up to Vincent, asking what was wrong and whether or not someone had been bullying him. Initially attempting to seek consolation from Noise, Vincent went to tell her about the position he was in with Gilbert's "impending death", only to remember what Miranda had told him. Miranda had claimed that she'd place a spell on him so that he can save Gilbert, but he wasn't allowed to tell anyone about it because otherwise the spell would become a curse that would make it so no one would be around to save Gilbert ever again. With this in mind, Vincent pushed Noise to the ground, and said that he couldn't tell Noise because he had to act on his own.

Noise remembers watching Vincent shake while he held back his tears, and since then she's always known that she needed to protect Vincent, deciding to take on her role as Vincent's surrogate big sister as she was meant to. Telling Echo that she remembers now who she is and now she wants to protect Vincent. Teetering, Noise falls over and reviews how she'd never intended on hurting Vincent, but even if he didn't have her there, Noise is thankful that Vincent finally has a place to cry now, with Ada. Both Oz and Echo run to Noise, with Echo catching Noise in her arms before she falls, while Oz takes his place beside Noise as she lays on the floor and cries. Echo, now in possession of Noise's body and able to address herself in 1st person rather than 3rd, asks why Oz is crying, explaining that it's because Oz called her that she was able to stand up and do the things she wanted of her own volition, which Echo thanks Oz for. Smiling, Oz says that he'll call for Echo as many time as she wanted, addressing her as "Echo-chan" once again, which makes Echo smile as she corrects Oz as she always does.

Characters in Order of Appearance

The breaking of Noise's heart

Oswald sees Lacie when Alice comes between him and Oz 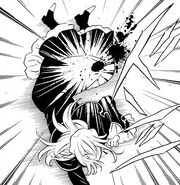 Duldee has Noise shoot Vincent in the leg 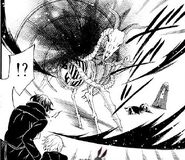 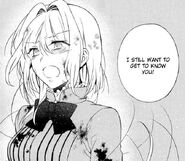 Ada's new haircut, courtesy of Demios
Add a photo to this gallery

Retrieved from "https://pandorahearts.fandom.com/wiki/I_am?oldid=50263"
Community content is available under CC-BY-SA unless otherwise noted.