Gryphon is one of the Black Winged Chains which act as the guardians of the Doors to the Abyss. Previously, it was necessary for each incarnation of Glen Baskerville for form a Contract with Gryphon and his fellow Black Winged Chains , though following the fall of the Baskerville Clan after the Tragedy of Sablier, the Door which Gryphon protects was given to the Vessalius Dukedom alongside the establishment of the Four Great Dukedoms. Gryphon has since formed a Contract with each head of the Vessalius Dukedom over the course of close to 100 years, until Oscar Vessalius; as he lacked the proper qualities to form any Contract. Xai Vessalius, who had renounced his place as Duke, forged a Contract with Gryphon in Oscar's place; though it would later be severed by Xai's death at the hands of The Cook. Due to the dissolve of the power held by the Four Great Dukedoms after Jack Vessalius' second attempt to plunge the world into the Abyss - it is likely that after Xai's death that Gryphon returned under the Baskerville Clan and continued served alongside Leo and his successors.

Gryphon appears as a gigantic amalgam of bird and beast; being large enough to carry at least three people on his back, while being strong enough to carry a total of at least six people. Gryphon head and wings are covered in glossy black feathers, while the rest of his body from the base of his neck-down, is covered in thick black fur, having the powerful hind legs and long tail of a lion. Gryphon's upper torso is more eagle-like, as his beak is razor sharp, his eyes are pupil-less and he possesses large feathered ears on either side of his head, while his front legs are scaly and possess large curved talons.

Gryphon was contracted to Levi, who was a Glen Baskerville meant to be succeeded by his assistant, Oswald. Gryphon was the fourth of the five Black Winged Chains to be transferred from Levi to Oswald, after Dodo and before Jabberwock, the process being completed by having Oswald drink Gryphon's blood and then drink Levi's blood in order to both form an Illegal Contract with Gryphon and transfer the combined soul of the past Glen Baskervilles into Oswald.

Oswald eventually hosted Glen's soul and was about to transfer Raven into his own successor, Gilbert, during his first Succession Ceremony. However, it was interrupted as Oswald heard the Door to the Abyss burst open, as well as the explosion that followed, releasing particles of Abyssal power into the air which had been caused by the severing of the chains that prevent the Abyss from engulfing Earth.

Immediately, Oswald ceased the ceremony and silenced the panicking guests, ordering his subordinates to slaughter all the guests within the mansion, as Oswald wanted to set their souls free before they were dragged into the Abyss and transformed into Chains . When they died as Chains, their souls would forever be trapped in the Abyss rather than being allowed to return to Earth after 100 cycles as they're meant to, and so Oswald was going to save the souls those within his reach before Sablier fell into the Abyss.

To prevent the rest of the world's chains from severing as well, Oswald summoned Gryphon, Raven, Owl , Dodo and Jabberwock to stop the breaking of the chains. However, the chains of Sablier had been severed first, which meant that Abyssal power would flow out of the gaps where there no longer existed any chains, and so Sablier was going to fall into the Abyss regardless, but by using his Black Winged Chains, Oswald prevented the entire world's fall into the Abyss. Sablier fell into the Abyss and at an unknown point, Oswald died. This nullified the contracts of Gryphon, Owl , Raven, Jabberwock and Dodo and so all five of the Black Winged Chains returned to guarding the five Doors to the Abyss, four of which were obtained by four Dukedoms that would use the Doors to solidify their positions above the other noble families. Together, the Four Great Dukedoms, which consisted of the Nightrays , the Rainsworths, the Barmas and the Vessaliuses created an organization called 'Pandora ' which was meant to study the powers of the Abyss, obtain the Intention of the Abyss and ensure the prevention of another tragedy. The Door that was guarded by Gryphon was given to the Vessalius Dukedom. Gryphon was not contracted to anyone until 100 years after the Tragedy of Sablier, when Duke Xai Vessalius approached it and made a Legal Contract with the Chain.

During Oz Vessalius' Coming of Age Ceremony , three Baskervilles arrived to pass judgement on Oz as he was part of a prophecy and had moved a clock that was dormant for 100 years forward. The three that arrived were Noise , another Baskerville and Xai himself. Gilbert was being controlled by Noise's Duldum when he stabbed Oz in the chest and dropped the blood on the floor, which allowed Xai's Gryphon to open a path to the Abyss . Gilbert breaks from Duldum's control and starts yelling at Xai, lightning from the storm outside flashes and Gilbert sees that the lead Baskerville was Oz's father, so when Oz went to attack Xai with a sword, Gilbert got in the way instead. B-Rabbit arrived and caused slight trouble for the Baskervilles after claiming Oz as her property, until Xai slashes her with his sword and sends her back into the Abyss. Xai then proceeded to judge Oz for his sin of existing. Xai spent the next 10 years with the Baskervilles, spending less and less time at home and with Pandora.

When Xai is sent by Bernard Nightray to retrieve Elliot and his valet, Leo , from The Hole of Sablier, Gil sees him for the first time in 10 years. Though Elliot refuses Xai's help, Xai continues to deny Oz as his son and so he takes his leave, though Gilbert runs after him, remembering what he did to Oz ten years ago.

Xai had been expecting Gilbert to follow him, turning around, he sees Gilbert holding him at gunpoint. Gil asks why Xai showed himself to Oz again, after Gilbert had told him not to. Xai smirks and teases that he did remember something like that now that Gilbert mentions it, recalling how it was after Gilbert had joined Pandora and held Xai at gunpoint spouting nonsense about how Xai was the one who dropped Oz into the Abyss because the Vessaliuses' Chain, Gryphon was used to do it. In a flurry of black feathers, Xai asks if what Gil wanted was to prove it again. Xai summons Gryphon and asks if the Chain Gilbert had seen had the same smile as Gryphon's, which enrages Gilbert and so he shoots at Xai and Gryphon. Xai smiles as Gryphon prepares to defend him, but suddenly a tattered cloak emerges between Xai and Gilbert. Mad Hatter had protected Xai while Xerxes Break held Gilbert back. Gryphon returned to Xai's body, and Xai continued on his way to the Baskervilles' Door to the Abyss.

Following the revelation that Jack Vessalius was the true instigator of the Tragedy of Sablier, as well as the reemergence of Oswald within Leo's body, the Baskervilles took over Pandora - with the intention of executing Oz - a he was revealed to have been a Chain possessing Jack's younger body. Gilbert - who was revealed to have been a Baskerville prior to the Tragedy of Sablier, betrays Oswald in favor of Oz - who he views as his true master - helping Oz escape Oswald's custody. As a result, Oswald organizes the executions of Xerxes Break, Sharon Rainsworth and Sheryl Rainsworth should Oz not voluntarily return to Pandora. Little did he know that Rufus Barma had acted as a triple agent when he pretended to ally with the Baskervilles, and thus rather than destroying the Rainsworth Key to the Abyss to stop any member of the Rainsworth Dukedom from using their Chains, he destroyed the Barma Key - thus allowing Break, Sharon and Sheryl to escape when the time was right with the help of Mad Hatter, Equus and Owl.

Prior to their escape however, Noise reveals herself, calling Break, Sharon and Sheryl deplorable. Break makes a move toward Noise, but Noise happily waves her hand and tells Break not to come near her, or else she'll kill her hostage. Noise lifts an unconscious Ada Vessalius up by her hair from beneath her robes, prompting Xai to come out from where he had taken shelter during the battle between the Baskervilles and their hostages, to show concern as he calls out for his daughter. Noise had known that using Ada would draw Xai out, having Duldum ensnare Xai with her threads in order to take control of Xai's body. Noise implies that she wasn't sure if using Ada would draw Xai out, asking what's wrong with Xai as he apparently cares for Ada. Noise then orders Xai to summon Gryphon for her. Duldum forces Xai to do as directed, Noise loading Ada and Xai onto Gryphon's back. Lottie and Dug (carrying Lily) stand and move towards Noise, calling out for her. Noise tells her comrades that she's going to Sablier, because she wants to see Vincent as soon as possible, managing to get Xai to take Gryphon through a nearby window, before picking up Dug, Lottie and Lily to join them.

While riding on the back of Gryphon (thanks to Noise's control over Xai), Noise grabs Ada by her hair, demanding that Ada wake up. Ada is shocked to see where she is, terrified beyond belief that Noise is going to hurt her. Noise just laughs and assures Ada that she has nothing to worry about, because she won't be letting Ada die just yet. Meanwhile, Lottie, Dug and Lily are hanging on to Gryphon's tail for dear life, with Lottie insisting that Noise help them now that they're all free from Pandora. Noise ignores Lottie and looks Ada in the eye, explaining that they're going to be in Sablier soon, and when they get there she's going to find Vincent and kill Ada before his eyes. Noise's ultimate goal is to teach Vincent that as a human, Ada differs from them as Baskervilles because of an absolute difference. Noise turns suddenly after hearing a scratching sound, trying to discern what's happening. Though Noise doesn't fully understand, she manages to grab onto Gryphon with Xai while Ada, Lottie, Dug and Lily are all thrown off of Gryphon into the streets of Sablier below.

Sometime after, Xai intervenes when Ada is about to be killed by The Cook, taking a blow to the back from the Chain's hatchet in the process. Though Xai saved his daughter, he suffered fatal wounds and is barely holding on when Oz returns to the scene after having temporarily fended off Noise. While Oz manages to find closure for himself through a short conversation with Xai, he and Ada leave to seek out their friends in Sablier, while Xai succumbs to his wounds and drops to the ground, where he dies from blood loss.

It is likely that with the dissolve of the power held by the Four Great Dukedoms following the restoration of the Chains of the World and the Abyss that Gryphon and the Vessalius Door to the Abyss was returned to the Baskerville Clan, and Gryphon would go on to serve Leo and his successors as the Baskervilles maintain a new harmony of the Abyss in the days that followed the near tragedy.

Gryphon's first appearance in the Manga. 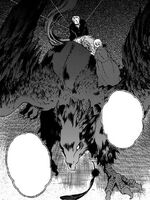 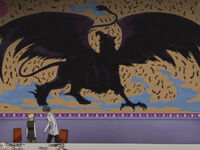 Retrieved from "https://pandorahearts.fandom.com/wiki/Gryphon?oldid=63164"
Community content is available under CC-BY-SA unless otherwise noted.