Pandora (finished in the final chapter)

The Core of the Abyss

Glen Baskerville (グレン＝バスカヴィル, Guren Basukaviru), or just called simply as 'Glen' (usually called as 'Glen-sama' by his subordinate), is the title of head of the Baskerville Clan who inherits his position from his predecessor over the course of a couple decades through a series of Succession Ceremonies.

The being known as Glen Baskerville leads a collection of people accepted by Abyss to become The Messengers of the Abyss--acting on behalf of The Core of the Abyss as they strive to maintain the harmony of the Abyss. The presence of Glen, as well as the Baskervilles, is the feature to supply 1st Dimension with a unique story as decided by The Jurors, with Jury directly planting herself within the Baskerville Clan as Glen's adviser in order to ensure that the 1st Dimension could be brought to it's proper diverse ending.

The existence of Glen differs from the rest of the Baskervilles, as each incarnation of Glen is born with a direct link to The Core of the Abyss. Additionally, in relation to a distortion of power relayed by The Core through each Glen, Children of Ill Omen are born. As Children of Ill Omen exist outside the planned structure of 1st Dimension - Jury imposed a rule that required each Glen to drop their respective Child of Ill Omen into the Abyss - citing them as a danger to the harmony of the Abyss due to their unnatural existence and ability to casually approach The Core. Without question, the tradition is followed by each incarnation of Glen, who are left unaware to the fact that the Children of Ill Omen do not need to be destroyed to protect the harmony of the Abyss.

With the successful transfer of the Jabberwock, the traditional robes of Glen Baskerville are passed onto the successor, and the entirety of the Baskerville Clan present at the event bow in order to recognize their new master. Immediately after the final Succession Ceremony, the new Glen must begin a Ceremony of Judgement, for which only their predecessor, Jury and their Child of Ill Omen are present. Apart from the initial purpose of dropping of the Child of Ill Omen into the Abyss, a Ceremony of Judgement is also meant to hone a Glen's skill with handling The Black Winged Chains.

With the succession of a new Glen also comes new responsibilities and information only meant to be heard by the Glens. This crucial information details the Chains of the World that hold the 1st Dimension together and prevent its drop into the Abyss. Additional information explains the existence of The Core of the Abyss and its function as a macrocosm for the 1st Dimension - thus only an incarnation of Glen is permitted to approach The Core in cases of extreme emergency. With their title and knowledge passed onto their successor, the previous Glen's body will begin to deteriorate over the course of a month until they ultimately die. Once they die, the previous Glen's soul joins its predecessors in the consciousness of the successor. Meanwhile the body mutates into a new Chains as a result of the large quantities of Abyssal energy that it had stored, often times forming Contracts with others in the Baskerville Clan due to their previous connection to Glen - eventually forming a consciousness of their own in the process. Soon after, the new Glen's own successor will arrive and be inducted into the Baskerville Clan alongside their Child of Ill Omen and the process will once again repeat.

In the event that the consciousness of Glen Baskerville is not transferred and the body is instead destroyed, then the collective consciousness will enter The Rule of 100 Cycles just as any other soul would, to be reincarnated 100 years after the last Glen's death.

As well, as displayed by Oswald and Leo, if one of the souls of the previous Glens intervenes and possesses the acting Glen, their soul will wear to the point of obliteration as they abuse powers that are no longer rightfully theirs.

As a leader & Duke of Baskerville Clan, and acting on behalf of The Core, Glen is granted by The Core of the Abyss some powers and abilities, such as: 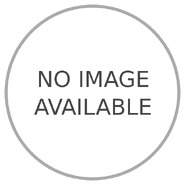 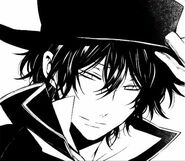 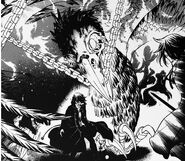 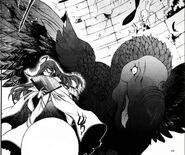 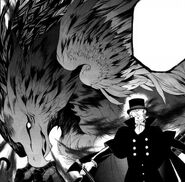 In anime, often Glen Baskerville is depicted in silhouette. But there is a little exception with Oswald's appearance as Glen in anime version, where himself depicted not in silhouette, more clearly; but with a shadow covered a half of his full face. The following pictures are the example :

Glen's silhouette as explains by Jack through Oz to Pandora, about Glen's purpose

Retrieved from "https://pandorahearts.fandom.com/wiki/Glen_Baskerville?oldid=59178"
Community content is available under CC-BY-SA unless otherwise noted.