Retrace XVI: Keeper of the secret

Oz and Gilbert Nightray found Emily at the site where Break and Alice had been previously whisked away by Cheshire, and they brought her back to Sharon. Oz said that he believed that Break had left her on purpose so that they would know to come after him and Alice and Sharon told him he was right. She then used her Chain, Equus to open a path to Cheshire's dimension for Oz and Gil to travel through.

When they reached the dimension, Sharon had Equus reside in Oz's shadow, explaining that Equus usually resided in Break's shadow, but at the moment, Equus was unable to find Break. Sharon then told Oz and Gil to look for Alice first, citing that Break wouldn't die too easily.

Suddenly, Cheshire revealed himself and asked Oz and Gil how they got into his dimension. Sharon told Cheshire, through Equus, that they'd be the ones asking the questions and asked him what he did with Break and Alice. Cheshire explained that Break was taken into the mirror a while ago by his own past and was likely in a deep sleep by now. Oz questioned Cheshire as to he targeted Alice and Break, and Cheshire simply stated that the two of them were enemies of the Intention of the Abyss , and while he didn't expect Break to find Alice, or for Oz and Gilbert to do the same, he would still kill them.

Cheshire lunged at them but Gilbert managed to shoot him in the shoulder, though the damage was superfluous as Cheshire had immense regeneration capabilities. Cheshire tries to attack them again but Sharon summoned Equus, whose power blasted Cheshire back. Sharon stated through Equus that she would take on Cheshire herself and charged at him. Sharon told Oz and Gil to go after Alice and Break while she held Cheshire off.

While fighting with Cheshire, Sharon explained that while Equus was primarily used for transportation and gathering intelligence, that didn't mean it couldn't be used offensively. Sharon told him that she had come to retrieve information about the Intention of the Abyss from him and Cheshire asked her why she and Break wanted to know about the Intention, to which she replied that they they wanted to uncover the truth of the Tragedy of Sablier. Cheshire grew silent for awhile then told Sharon that she's noisy before dragging his ribbons across his body and teleporting away. Sharon told Cheshire to wait before realizing that there was someone behind her. She was knocked unconscious by Echo and Noise then took over and used Duldum to control Sharon and Equus under Vincent Nightray's orders.

Noise had Sharon make Equus retrieve only Oz and Alice when Cheshire's dimension began crumbling, leaving Gil and Break behind. Noise then had Equus drop both Oz and Alice in the middle of a meeting between the four Dukes. As Gilbert and Break needed to leave the dimension or risk their own destruction, Gil used Raven's power to bring himself and Break back to their own dimension, as Vincent had planned. The use of Raven's power unlocked the seal on Alice's own powers, reverting her to her B-Rabbit form.

Immediately after this, Bernard Nightray accused Oz and Alice of being assassins sent to kill the Dukes and sent numerous Pandora members chasing after them, while the Dukes vacated the premises. Vincent left a clue about Sharon's whereabouts in Break's room through a mass amount of black roses and a single black knight chess piece, to symbolize Equus. He then went to the rose garden to await Break's arrival.

Re-Emergence of the Head Hunter Arc

Sharon traveled with Oz, Alice, Gil and Gruner to a mansion, near the small town of Carillon, to look for one of the sorcerers' descendants and the Sealing stone. They entered the house which was guarded by a valet named Marie. Marie attacked the group with a unique saw-like blade, and so Sharon attempted to summon Equus to protect herself. Equus however wouldn't come and Sharon, heartbroken, asked why Equus was ignoring her plea. Marie explained that the two members from Pandora who had come before them were the same, relying on their Chains and believing that they were all-powerful, but when Chains didn't come, they were reduced to scared pathetic humans who had over-exaggerated their power, and died as a result. Marie then attacked Sharon, though Gruner took the blow for her. Soon Oz uses B-Rabbits power and puts a stop to Marie's attacks, nearly killing her if not for Alice's intervention. It was then that the descendant of the sorcerer revealed himself and led the group down to the basement, to the Sealing Stone he was protecting. He revealed that the Sealing Stones negated the powers of all Chains apart from B-Rabbit, and told Oz the old prophecy, that the one who wielded the power of B-Rabbit would one day seek out the Sealing Stones in order to prevent Glen Baskerville's return.

During Oz's second Coming of Age Ceremony, Sharon had Equus reside in Oz's shadow, telling Oz through Equus that Reim Lunettes and the Pandora members had begun searching Isla Yura's mansion for the Sealing Stone that he was rumoured to have. Oz asked Sharon whether it would be better to put Equus in Reim's shadow rather than his, to which Sharon explained that Isla Yura was interested in Oz, so they could never be too cautious. She further explained that unlike in Cheshire's dimension, the power of the Abyss here was weak, and so Sharon wouldn't be able to use Equus to travel long distances as easily. Oz stated that he's still worried about Reim because he didn't have a Chain, but Sharon corrects Oz, telling him that Reim was a Contractor too. This surprised Oz, and Sharon told him that Reim was perfect for the job, as he had an ordinary appearance, and therefore wouldn't attract any unwanted attention. Oz told her that was a little mean, before being caught talking to seemingly no one by Elliot Nightray .

While Oz and Alice danced, Break asked Sharon whether or not she wanted to be dance like everyone else, but Sharon stated that she was more focused on making sure that Oz doesn't run any risks. Break asked Sharon if it wouldn't just be easier to put Equus in Yura's shadow, and she explained that while it could be done, Yura might find out. Sharon then stated that all they could do right now was wait to hear back from Reim. Break asked her if regretted making her contract with Equus, but Sharon denied this, saying that she wanted to form the contract, and although she did have to give up certain things, what she'd get in return for what she'd lost depended on her actions.

Later, Sharon learns through Equus that Oz and Leo had found the headless body of a Pandora Member. She immediately told Break, who told her not to worry about it as it wasn't part of their mission. Break said that he'd watch Yura, and told Sharon to watch Oz's through Equus. Sharon questioned whether or not it would be best to just bring Oz and Leo back right now through Equus, but Break replied that Oz likely wouldn't listen and was probably looking for clues about the killer as they spoke. Break told Sharon to use Equus so that they can apprehend the culprit if they attacked Oz.

After Oz sent Leo and the maid who'd found the dead body away, he walked down a dark hallway where he knew someone was waiting for him. Suddenly, Sharon sent Alice through Equus and Alice quickly tackled the robed figure to the ground, revealing him to be none other than Phillipe West. Sharon told Oz to stop being so reckless and that she'd send Gilbert to Oz's location too as soon as she located him. She is suddenly cut off and Oz questioned this but he was distracted by Philippe.

Meanwhile, In the ballroom, Isla Yura's cult began decapitating guests and setting the mansion on fire whilst blocking all the exits. Sharon came together with Gilbert and Elliot during the chaos, Gilbert saving her from an attacking cult member. Sharon told Gil that she couldn't send him to Oz like she had wanted to, and deduced that a powerful force must have forced Equus out of Oz's shadow. Sharon noted how this was similar to what had happened at Master Rytas' mansion, meaning that it was likely that Oz was near the Sealing Stone.

Sharon used Equus to transport Ada to safety away, and later does the same with Reim, as he was severely wounded after his encounter with Lily. Finally, after the destruction of the Sealing Stone, Sharon used Equus to transport the remaining survivors in the mansion, namely Oz, Alice, Gilbert, Leo, Echo, Vincent, Break, Phillipe herself and the orphans who were still alive, outside before it collapsed.

After the incident in Isla Yura's mansion, Sharon has Equus stay in Oz's shadow on the day that he, Gilbert and Alice were free to roam Reveil. She used this to note Leo, Vincent and Echo's arrival to Pandora. Sharon stated that while Oz and Leo were talking for now, if anything should go awry, she would use Equus to bring all of them back to Pandora Headquarters immediately. Sharon is distracted however when she learned that her grandmother, Sheryl Rainsworth, had been attacked by Rufus Barma with his Chain, Dodo and that the Baskervilles had attacked Pandora. Sharon informed Oz of this while he runs through Reveil after Leo, who had fled from their fight, and Oz realized that Leo, Vincent and Echo were meant to be a distraction while the Baskervilles infiltrated Pandora. Oz has Sharon summon Equus, and together with Gil and Alice, returns to Pandora's Headquarters.

Later, after Gil re pledges himself to Oswald as a Baskerville, Sharon comes out to help Break fight off the Baskervilles. Break orders Sharon to use Equus to get Oz somewhere safe, while he himself fights Rufus. As Sharon has Equus start to open a portal, Rufus states that he grows tired of the situation, and so he throws down the Rainsworths' Key to the Abyss and summons Dodo. Rufus then has Dodo use his powers to destroy the Key, thereby nullifying Sharon and Equus' Contract until the Key can reform itself. Thus, this prevents Sharon from helping Oz escape, and so Sharon and Break are subsequently captured by the Baskervilles without their Chains.

Sharon used Equus, when the group, including Uncle Oscar, get drunk and Alice and Gilbert start fighting over who Oz belongs to, she used Equus to transport Gilbert and Alice away from Oz.

Sharon doesn't use Equus again until during the Chain invasion, in which she used Equus to battle the hundreds of chains flooding in from the Abyss.

Equus appears as a muscular black unicorn with a mane of purple flame with violet eyes and more purple flames on its ankles and tail. When Equus teleports or appears, black waves tend to appear out of the ground. 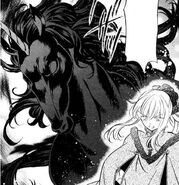 Equus with Sharon in anime

Sharon summons Equus
Add a photo to this gallery

Retrieved from "https://pandorahearts.fandom.com/wiki/Equus?oldid=62832"
Community content is available under CC-BY-SA unless otherwise noted.