As Oz said his speech, the clock that had stood still for 100 years started to move once again. As the bells chimed, time seemed to stop and the Baskervilles--Xai, Noise and two unknown figures--arrived with control over Gilbert. Gilbert, controlled by Duldum, was made to stab Oz in the shoulder which gave his blood to Gryphon's seal which appeared and bound Oz.

But before Xai could summon Gryphon, the B-Rabbit appeared and attacked the unknown Baskerville and Xai, saying that Oz was its own property. While they fought, Noise held Oz in place. Gilbert was released from his trance as his will was too strong for Duldum's bounds, and when a flash of lightning hit and revealed Xai's face, Gilbert questioned his intentions only to be pushed aside by Xai.

Oz, in an attempt to defend Gilbert, went to kill Xai with his sword. But Gilbert knew that Oz would be killing his father, so he stood before Xai and was slashed across the chest. B-Rabbit was distracted long enough to be sent back to Abyss where she would wait for Oz herself. The Baskervilles, taking advantage of Oz's confusion, restrained him as Xai sent banished Oz to Abyss for 'the sin of existing.'

Oz. In reality Pandora came to search for the Sealing Stone of Glen Baskerville that Isla Yura is known to have, the same task of the Baskervilles.

Reim Lunettes is kidnapped by Lily Baskerville and her chain while searching for the Sealing Stone, after an attempt to kill her, he realizes that the Baskervilles cannot be killed and that Lily plans to play games with Reim forever.

Leo fights with Elliot after Elliot finds out he is connected to Yura and the two go their seprate ways, in the process their story is explained to both Gilbert and Oz, and shortly after the Head Hunter, Phillipe being the main suspect as he was close by and is a part of the Head Hunters. Leo takes the maid who found the body to safety as Alice tackles Phillipe and finds out that he is meant to lead Oz to Isla Yura's play, the Tradgedy of Sablier.

Yura is also confronted by Lottie who dispatches him when he doesn't fight back, though before she can interrogate him, Break stops her and questions her, though they are interrupted when 2 Head Hunters ambush them, and together Break and Lottie kill them. Dug appears, but is attempting to attack Break because he is stopped by Lottie who knows he could never defeat Break, together they leave, as does Yura using remarkable and unexpected speed, leaving Break to go off and find the main Head Hunter.

Meanwhile the Head Hunters have be assassinating anyone in their way and they also set fire to Yura's estate to block off all the exits. Vanessa and Hans find Elliot who vows to kill the Head Hunter, though she convinces him to leave with her. He blacks out soon after and wakes to see Vanessa was killed by the Head Hunter and Hans is also thought to have been killed. Break appears suddenly and singles out Elliot as the Head Hunter. Break instructs Gil to see if Elliot has the Incuse of an Illegal Contractor as he was not sure if Elliot really was indeed the Head Hunter as he just sensed its power. Gil and Break argue shortly before determining he is not the Head Hunter as another assassination happens while Elliot's power would have cause all assassins to lose power. Break goes to look for Reim and Gil goes to look for Oz and Alice. Break finds Reim just as he is pronounced dead by Fang and Lily starts crying for killing her own friend as well as Break's. Break then summons Mad Hatter to kill Lily, but he doesn't know that the Baskervilles are immortal and may kill himself in the process.

The guests in the ceremony

The guest in the ceremony

Oz in the ceremony

Mrs. Kate in the ceremony

The guests in the frozen time

Mrs. Kate in the frozen time

The ceremony in chaos
Add a photo to this gallery 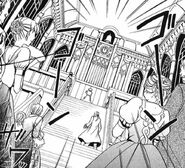 Retrieved from "https://pandorahearts.fandom.com/wiki/Coming_of_Age_Ceremony?oldid=61582"
Community content is available under CC-BY-SA unless otherwise noted.