Claude Nightray was the second eldest heir to The Nightray Dukedom. He was known to be rather close to all his legitimate siblings, but he hated Gilbert and Vincent. His hate became so much more when Gilbert contracted with Raven rather than a legitimate Nightray heir. Claude could not contract with Raven because of Gil's tie to it that existed for over 100 years, though it is unknown if Claude would have been able to contract with any other Chain.

Claude was born as the second son of Bernard Nightray and Bernice Nightray, after Fred Nightray and before Ernest Nightray, Vanessa Nightray and Elliot Nightray. When Claude became old enough, he attempted to form a contract with Raven, the Nightrays' guardian of their Door to the Abyss. Claude failed, as had Fred and Bernard, and later Ernest, but Claude still had faith that Elliot would be able to form a contract with Raven successfully.

One day, a boy was found barely alive outside of the Nightrays' Door to the Abyss. For a reason unknown to Claude, Bernard adopted this child, Vincent, into the Nightray family, which infuriated Bernard's brother-in-law as well as Fred, Claude and Ernest. This malice escalated when Bernard adopted another boy into the Nightray Family, Gilbert, apparently being Vincent's long lost brother, who had been found in a similar condition as Vincent in front of the Vessaliuses' Door to the Abyss. Whenever Bernard, Bernice or the valets of the family weren't around, Claude, his uncle, Fred and Ernest would take the opportunity to beat on Gilbert and Vincent for calling themselves Nightrays.

When Elliot turned fourteen, Ernest brought Elliot with him and Claude to Sablier to visit The House of Fianna, which Claude objected to, however Ernest told Claude not to worry as he didn't plan on telling Elliot everything. While Claude and Ernest spoke with Mrs. Finn, Elliot wandered off and got into a fight with an orphan named Leo. Ernest and Claude heard this and so they came into the room with Mrs. Finn to break up the fight, Claude restraining Elliot. The three went home after this, where Bernard lectured Claude and Ernest severely for bringing Elliot to Sablier before he planned to himself.

Claude's utter hatred for his adoptive sibling reached a peak when Claude heard that Gilbert had formed a contract with Raven. Claude and Ernest stormed into their father's office, asking Bernard why he would allow Gilbert to form a contract with Raven when h wasn't even a legitimate Nightray. Bernard was confused by Claude's fury, saying that finding Raven's contractor at long last is cause for celebration. Claude stated that while it was true that Fred, himself and Ernest had failed to form the contract, Elliot was never given the chance. Vincent, who was also in the room, scoffs and says that Elliot wouldn't do, as a contract with Raven didn't just require aptitude, but also qualification, and Gil had those qualifications for some time now.

Following this, Fred was decapitated by someone who became known as The Head Hunter while he was out in Reveil, and soon enough, Claude's uncle had fallen victim to the Head Hunter as well. Claude and Ernest took the Head Hunter as an opportunity, and so Ernest had obtained some poison. Claude was to slip the poison to Gilbert without notice, and the Head Hunter was meant to take the blame for the assassination. However, defying all odds, Gil survived and Ernest blamed Claude for their failure.

Sometime later, Claude and Ernest set fire to the Nightray mansion, before tracking down Elliot and telling him to leave with their mother while they 'took care of the Head Hunter'. Elliot left and when they believed that he was out of earshot, Claude and Ernest spoke of their plans to kill Vincent and Gilbert. Claude was hesitant because they had already failed once, so the two of them would be on their guard, but Ernest tells him that they couldn't give up on their plans now after how far they'd come. Claude reluctantly agrees and tells Ernest that they should hurry before they die in the fire they'd started. Ernest notes of how much of an honor it would be for Gil and Vincent to die by the hands of the Head Hunter, whom they'd blame the assassination on, before remarking on how they'd also take the opportunity to kill Leo, as they didn't understand how Elliot could keep a commoner around as his valet, deciding to find Elliot a new valet before finding the guests of the Nightray mansion, whom they planned to safely escort out of the mansion.

However, what they didn't realize what that Elliot had heard Claude and Ernest's plans to kill Gilbert, Vincent and Leo. Humpty Dumpty, Elliot's newly Illegally Contracted Chain, had put Elliot in a hypnotic state and convinced him that it would be best to kill his two elder brothers to save Leo (as Humpty Dumpty's purpose is to protect Glen Baskerville's destined vessel). Elliot massacred all of the guests in the mansion as well as fatally wounding Claude and Ernest, Humpty Dumpty finished the job by using his tongue to decapitate Claude and Ernest so that Elliot wouldn't have to bear the burden of their deaths, as Humpty Dumpty had convinced Elliot that it was the Head Hunter who'd assassinated his brothers. Although Humpty Dumpty blocked these memories from Elliot, Elliot still often dreamed of this event, cringing at the bloodshed, unaware that it was the day that he'd murdered his brothers.

In life, Claude had inherited his father's pitch-black hair, which he kept slicked back, his hair coming to a point at the top of his head while the rest flowed down his neck, Claude only allowing his sideburns to face forward and curl into the form of his face. All in all, Claude's hairstyle held some similarities to Raymond Nightray's. Claude had a strong jaw structure, as well as high cheekbones. Claude's eyes were light brown and were often glaring to some degree, adding to the intimidating appearance of Claude's stern face. Claude's attire commonly consisted of a black overcoat, pants and shoes, a white undershirt, an ascot and a pair of white gloves.

Claude was a loyal member the Nightray family, and grew to be disgusted by his father's decision to adopt Vincent and Gilbert as Nightrays, taking out his rage on the two brothers whenever Bernard and Bernice were not around. Claude was usually more quiet and reserved than his siblings, often sitting back and drinking tea whilst Ernest or Vanessa spoke with Elliot. However, Claude displayed his masked anger following Gilbert forming a Legal Contract with Raven. Claude was outraged that his father would allow such a thing to occur, and because Claude was not able to get through to his father, he allowed Ernest to talk him into trying to kill Gilbert and Vincent. Claude was seemingly not as adamant to kill Gilbert and Vincent as Ernest had been, worrying about getting caught or somehow having their intentions exposed as the regret began to set in. Ernest's dominant relationship over his older brother, allowed him to talk Claude back into Ernest's scheme.

Ernest was Claude's younger brother, but it often seemed like Claude allowed Ernest to push him around sometime. The two were close, closer than Claude was with any of his other siblings. He often seemed bored, having a very laid-back personality and not saying much in numerous situations. When Ernest decided that they needed to kill Gilbert and Vincent, Claude went along with it because he felt that he had to. Claude was apparently the one to prepare the poison for Gilbert on their attempt to assassinate him. Ernest blamed Claude for their failure because he had suggested fast-acting poison so that they had time to decapitate Gilbert, impersonating The Head Hunter, and Claude often took the blame without question. Claude was beginning to feel regret after he and Ernest set the Nightray mansion on fire to cover up their planned murder for Gilbert and Vincent, but Claude let Ernest talk him back into their plan, showing that between the two, Claude was not dominant even though he was the older brother, and because of his choices to let Ernest take control, Claude died alongside his younger brother.

Elliot was the next closest sibling to Claude. Claude cared for Elliot's safety and didn't usually like to tell Elliot what to do, having left that task to Ernest. Claude had thought that Elliot had the potential to make the contract with Raven, had he been given the chance, even though Fred, Ernest and himself had already failed, showing that he had faith in his youngest sibling. Claude alongside Ernest told Elliot to take their mother and leave the mansion while they dealt with The Head Hunter, though his true intentions were covered up, Claude genuinely cared for Elliot. He was shocked when he saw Elliot with Humpty Dumpty as he arrived to kill the two brothers.

Claude even allowed Ernest to talk him into attempting to assassinate Gilbert, and it was Claude who handled organizing the poison for Gilbert, though it didn't work to the extent that it was meant to. Ernest wanted to try again, but Claude had feelings of regret, making it possible that Claude didn't hate Gilbert and Vincent as much as he claimed, but he soon allowed Ernest to manipulate Claude back into his plan, and as such he went with Ernest to fulfill his assassination attempt, which failed yet again by Elliot's hand.

Though the two were never shown to interact, it is assumed that Claude did not think highly of Leo, even though he had approved of Leo becoming Elliot's Valet. Ernest brought up killing Leo as well after talking Ernest back into killing Gilbert and Vincent in order to find Elliot a "decent servant", something to which Claude never objected to.

Claude, Ernest and Vanessa pose together in Pandora Hearts 18.5: Evidence 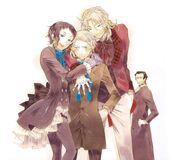 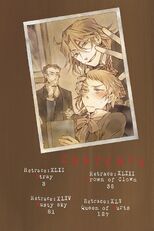 Add a photo to this gallery

Retrieved from "https://pandorahearts.fandom.com/wiki/Claude_Nightray?oldid=50976"
Community content is available under CC-BY-SA unless otherwise noted.