As their creation is prompted by Glen Baskerville, every natural incarnation of Glen has had some kind of connection to a Child of Ill Omen (most commonly through a younger sibling). As Children of Ill Omen exist outside of the natural order of the Abyss, they are able to use their existences to penetrate the dark heart of the Abyss and come into direct contact with The Core; potentially disrupting the ideal functioning of the dimension, called the harmony of the Abyss. Initially, it was believed that, for this reason, each incarnation of Glen Baskerville had to cast their respective Child of Ill Omen into the Abyss using the Chains of Condemnation summoned by the Black Winged Chains. These Chains of Condemnation would drag the Child of Ill Omen into the darkness of the Abyss and focus their energy on tearing apart the aberration's "sinful existence"; removing them from the Rule of 100 Cycle and making it impossible for their souls to return.

Since the Tragedy of Sablier, there has been exceptions to the traditional means of the creation and destruction of Children of Ill Omen. The first exception was Xerxes Break; born as Kevin Legnard around ten years following the Tragedy. Unlike the Children of Ill Omen before him, Break's existence was not prompted by a connection to an incarnation of Glen Baskerville, therefore making his powers as a Child of Ill Omen significantly weaker and his reasoning for being born as a Child of Ill Omen a mystery. Although it could be likely that the events that took place during the Tragedy of Sablier caused a distort in the process of how Children of Ill Omen caused to existence. The second exception to the traditional process is Leo, who received the title of Glen Baskerville without having a connection to a Child of Ill Omen; as he received the reincarnated soul of Glen Baskerville after it exited the Rule of 100 Cycles following Oswald's death during the Tragedy of Sablier.

The Case Study of Vanitas

Children of Ill Omen from the universe of The Case Study of Vanitas are created as a result of an aberration of sorts, with the only currently identified Child of Ill Omen being Vanitas of the Blue Moon - a Vampire born on the night of the Blue Moon rather than the Crimson Moon as all other Vampires are. Due to this anomaly, Vanitas of the Blue Moon was shunned and feared out of pure superstition by his fellow Vampires, being forced out of their village in the forests of Averoigne. After his exile, Vanitas was cold and alone and created a grimoire called The Book of Vanitas as a means of revenge. The Book of Vanitas possesses the ability to annihilate the Vampires entirely, but it has since been passed on to another, a human who inherited the name Vanitas alongside the grimoire and intends on using it to cure Vampires of their recent mysterious plague. What became of Vanitas of the Blue Moon remains unknown, and it is also unknown if there are any other Children of Ill Omen in the universe of The Case Study of Vanitas.

Lacie, Oswald's younger sister. One day she was approached by Jury, The Juror who had been manipulating the Baskervilles with false knowledge that she is meant to protect the head of their household, Glen. She told Lacie to "fall" quickly, as she was a Child of III Omen, and the Children of Ill Omen were a threat to her existence. This prompts the previous Glen (Levi) to explain Lacie's fate to her. Lacie was known to have felt the existence within The Core because of her existence as a Child of Ill Omen and visited it at least twice without any known distortions occurring. Lacie became close friends with the Core who was grateful for Lacie; this is due to the fact Lacie was the only one who noticed the Core's loneliness and seek to end it. Due to Levi's manipulation on Lacie (his desire to seek change and Lacie's desire to end the Core's loneliness), Levi impregnated Lacie prior to her descent. Lacie gave birth to twins (Alice and the Intention of the Abyss) before the darkness completely erased her existence.

Vincent has only one Crimson eye but because of it, he was treated poorly and often beaten out of fear that he would attract misfortune. This also led to his brother, Gilbert being beaten alongside him, as Gilbert attempted to keep Vincent safe. Vincent was later taunted for having a red eye by Alice, as she had known about the Children of Ill Omen, this prompted Gil to attack Alice and Vincent to utterly despise her. As Vincent was a Child of Ill Omen, he was the only person alive at the time who could open the Door to the Abyss aside from the then Glen Baskerville, Oswald; as such he was manipulated into doing so by Jack Vessalius in order for Jack's Chain, Oz the B-Rabbit, to appear in their dimension so that he could plunge the world into the Abyss. When he was dragged into the Abyss during The Tragedy of Sablier alongside his older brother, Vincent was delivered to The Core of the Abyss because of his status as a Child of Ill Omen, where he met The Intention of the Abyss and fellow Child of Ill Omen, Xerxes Break.

Originally born as Kevin Legnard ten years after the Tragedy of Sablier, Break was destined to act as a knight of the Sinclair Family; a dominion that often butted heads with the Four Great Dukedoms, jealous over the power they'd been granted. However, Break had no discernible ties to an incarnation of Glen Baskerville; since the combined soul of Glen Baskerville died alongside Oswald and was enveloped by the Rule of 100 Cycles. Even though Break was in fact a Child of Ill Omen, the reason for being born as such an aberration is unknown (however it's possible that it was a ripple effect of the Tragedy of Sablier) and as such Break's powers were much less powerful than traditional Children of Ill Omen's. Nevertheless, Break's distorted powers attracted misfortune to all those surrounding him, eventually leading to the deaths of the entire Sinclair Family and his Illegal Contract with Albus the White Knight. Through Albus, Break intended on changing the past and saving his master, Roman Sinclair, from death; only it instead brought more tragedy to Break as he was propelled into the future and learned that his actions only made things worse. Since then, Break had been devoted to uncovering the secrets of the Tragedy of Sablier in pursuit of fulfilling a promise he made to the Intention of the Abyss by destroying her existence. Unfortunately, although Break unearthed said secrets, the journey brought on his death through the overuse of his second Chain, Mad Hatter. Despite his demise, Break managed to send his friends off to set the world right by using his powers as a Child of Ill Omen to bring them into the Courtroom Dimension in order to stop Oswald from altering the past to benefit himself; although he was unsatisfied that he couldn't fulfill his promise to the Intention of the Abyss, Break believed his friends can fulfill her wish.

The Case Study of Vanitas

Vanitas of the Blue Moon

Unlike most vampires, Vanitas was born under the night of a blue moon. Since the blue moon is considered an omen to vampires since they lost their powers under it, Vanitas's existence was shunned by other vampires. Majority of the vampires rejected him and eventually exiled him from the village. Due to this isolation and mistreatment from his fellow vampires, Vanitas vowed to make the vampires suffered like he did. He create a book that served as his tool of revenge called the Book of Vanitas which have the ability to annihilate all vampires 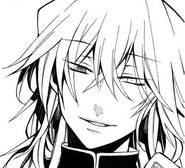 Vanitas of the Blue Moon
Add a photo to this gallery

Start a Discussion Discussions about Children of Ill Omen