Arthur Barma was an heir to the Barma dukedom 100 years ago. After the Tragedy of Sablier, Jack Vessalius forced Arthur to write a fake story, portraying Jack as the hero of the Tragedy and Glen as the villain, though unbeknownst to Jack, Arthur came clean about all that Jack had done in the last chapter of his journal, which he heavily encripted. Sometime after the Tragedy, Arthur became the Duke of the Barmas and joined with four other sorcerers to create five Sealing Stones from Oswald's body.

Arthur was born as a part of a foreign nobility, born sometime before his younger sister, Miranda Barma. After reaching adulthood, his family lost a power struggle in their home country, and were exiled into the neighbouring country, where Arthur began 'kissing up' to the Glen Baskerville at the time, Levi . Arthur was to attend an event at the Baskerville mansion held by Levi in Arthur's honour. Arthur's sister, Miranda , introduced Arthur to a man who could play an instrument from their culture, a morin khuur, and would be willing to do so at Levi's event, as Arthur saw no harm in the matter, he accepted this and brought the man to the Baskerville estate with him.

During the event, the musician saw a Baskerville named Lacie and threw away his desguise and instrument to run and embrace Lacie from behind, stunning Arthur. Another Baskerville knocked the musician unconscious and Levi asked Arthur if he knew anything about this. Arthur feverishly explained that he didn't know the man and that his sister had just introduced Arthur to him. Levi then asked Lacie if she knew the man, and although she denied it, she did infact know the man as Jack Vessalius, whom she'd met eight years before hand. After Levi interrogates Jack, Oswald, Lacie's brother and the one who knocked Jack unconscious, tells the Baskervilles that neither the Barmas or the Vessaliuses would be held responsible for what had happened.

Arthur was skiddish by nature, but as Jack spent more time at the Baskerville estate, Arthur got to study him further. Arthur's overall impression of Jack was that he was like a person from another world to Arthur, and that he was bright, kind, witty, intelligent, abundantly popular and beautiful, generally the opposite of what Arthur thought of himself. So because of this, Arthur always thought it was a mistake whenever Jack called for him, and as they spent more time together, and Jack started refering to Arthur as his friend, Arthur's heart trembled. What Arthur hadn't realized until it was too late was that Jack was only using him to get to his sister, Miranda, and nothing more.

After the Tragedy of Sablier, Jack had Arthur organize a group of four sorcerers, as well as himself, as the Barmas delved into sorcery 100 years ago, and played up that Arthur was going to divide Jack's dying body into five pieces to be created into Sealing Stones that would prevent the return of Glen Baskerville. Unbeknownst to the sorcerers, Jack had Arthur use Oswald's body instead.

Jack oversaw the writing of Arthur's memoirs to ensure that the events of the Tragedy of Sablier were chronicled the way Jack wanted them to be, making Jack seem like the hero, and Glen seem like the enemy. Arthur went against Jack and came clean about how Jack was the cause of the Tragedy of Sablier, as well as how he had sealed Glen's body rather than Jack's, in the last chapter of his memoirs. Arthur heavily encripted this section of his journal, possibly because he never intended for anyone to be able to read it, hiding it in the Barma family library in their newly located mansion within Reveil. At an unknown point after the Tragedy of Sablier, Arthur became recognized as the Duke of the Barmas and contacted numerous Baskervilles within the Abyss to obtain information about specific Chains, like Humpty Dumpty. Arthur also obtained Jack's own memoirs, explaining the existance of Alice and her odd behaviour, which he passed down through the Barma family, eventually reaching Rufus Barma.

While his memoirs were found 100 years later by his descendant, Rufus, many of Arthur's documents on sorcery and the Abyss were passed through the Barma's family, ending up in the hands of Rufus Barma's relative, Isla Yura. After the failed attempt to recreate the Tragedy of Sablier using the information from Arthur Barma as well as the guardian of the Sealing Stone whom had died prior to Yura's relocation in his mansion, Yura sent Rufus Arthur's volumes of Abyssal documentation. Sometime after this, Rufus uncovered Arthur's confession in the final chapter of his memoirs, defecting to the side of the Baskervilles after learning of their innocence.

Arthur Barma had gray eyes, thick eye browns and long red hair which is tied back with a black bow, though his bangs still fall over his face. Arthur wears an ascot of an unknown colour, as well as a black undershirt, a long overcoat, white pants and white gloves.

Arthur's personality is very recessive. He is timid, and often skiddish, as displayed when he panics after Jack embraced Lacie at Levi event for Arthur. Arthur also does not think highly of himself, as within his journal he had refered to himself as being dim-witted and bad with his words, and so whenever someone like Jack, who seemed to be of higher status than Arthur, would address him, Arthur would think that it was a mistake, and when Jack refered to Arthur as his friend, Arthur became very nervous.

Arthur was skiddish whenever Jack addressed him because he viewed Jack to be of a higher status than he was. Arthur's heart trembled when Jack began addressing Arthur as his friend, and at first Arthur had viewed Jack as someone from another world, though it seemed innocent enough. What Arthur couldn't see was that Jack was only using him to get to Miranda Barma, and that Jack didn't actually care about Arthur. Jack then proceeded to force Arthur to chronicle the events of the Tragedy of Sablier falsely and bind Oswald's soul. Rufus Barma viewed Arthur's confession in the last chapter of his journal to be more like a cry for help, hoping that someone would save Arthur from Jack.

Arthur was always kissing up to Levi, trying to get close to the Baskerville Dukedom because the Barmas had lost their noble status and been banished from their own country. Levi allowed this though, as he believed that experiencing another culture is good for a person, and he didn't seem to mind Arthur in general. Levi joked with Arthur, playing on his anxiousness, as shown when he teasingly asked Arthur if he'd known anything about Jack's intentions after Jack had embraced Lacie.

Although Arthur was closer to Levi, Oswald didn't seem to mind Arthur. The two have yet to be seen interacting with one another, but when Jack brought both Arthur and Raymond up when meeting Oswald at the pond on the Baskerville estate, Oswald didn't argue when Jack spoke of them as their friends, although Jack did say that they never got to see the side of Oswald that Jack saw, implying that although Arthur was friends with Oswald, they were not overly close.

An excerpt from Arthur Barma's memoirs, explaining the rule of 100 cycles, as read by Rufus 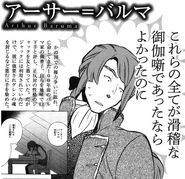 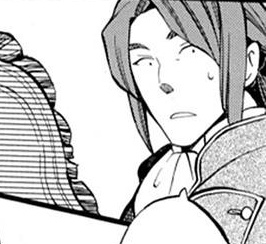 Arhtur suprised after Jack drops his instrument and goes after Lacie 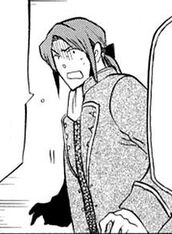 Arthur explaining to Glen that his younger sister, Miranda Barma brought Jack to him 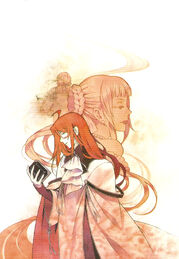 Arthur, his sister and his decendant

Retrieved from "https://pandorahearts.fandom.com/wiki/Arthur_Barma?oldid=62146"
Community content is available under CC-BY-SA unless otherwise noted.